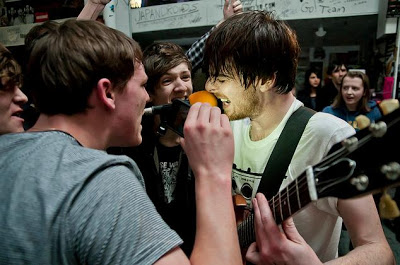 In store gigs as we all know are lackadaisical affairs, a stripped down version of bands normal sound to a handful of obsessive fans with little atmosphere and bright strip lighting. WRONG. Enter Pulled Apart By Horses and watch all hell break loose. Anyone who has seen this band live will know that they don’t do lackadaisical, stripped down or little atmosphere – they are a full on rock onslaught which frankly should come with a health warning.

A huge crowd of metalheads, hardcore kids, punks and indie scenesters packed out Rough Trade East for an early 7pm instore to celebrate the launch of the Leeds bands second album ‘Tough love’ reviewed here, further proving that with this record they are continuing to widen their audience and appeal to more and more people – expect your dad telling you about this great new band he’s heard on the radio in a months time.

New tracks are interspersed with old favorites from the debut including ‘High Five, Swan Dive, Nose Dive‘ and set opener ‘I Punched A Lion In The Throat’; the tracks blend perfectly as both new and old are greeted not with the usual rapturous applause you here at these things but in true PABH style with a full on mosh pit breaking out! We’ve never seen a mosh pit in a record store until now (there’s a tick for the box of life) but there should certainly be more of these in the future. Singer Tom Hudson clearly also makes the most of this rare occasion and joins the crowd for a ‘dance’. He brings his mic into the crowd and sings a few tracks from floor level, nose to nose with the front row before being lifted up and crowd surfing his way around the store (life box tick number two). The band are in high spirits and banter with the crowd and each other between songs before closing on the behemoth that is Tough Love’s opening single ‘V.E.N.O.M.’.
Not you’re average Monday. Not your average in store. Not your average band.

PABH are playing the Barfly this Sat (28th) headlining the XFM all dayer.