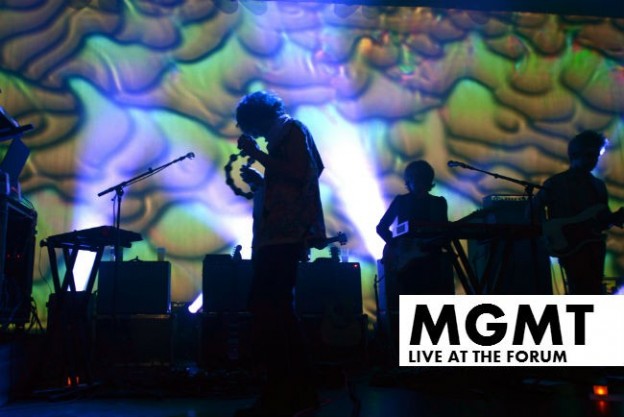 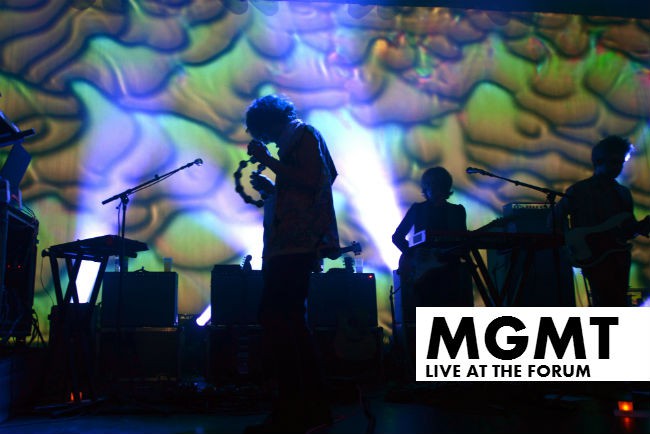 MGMT – We know what you’re thinking, it’s been a while since we’ve heard that combination of consonants too, but the psychedelic sounds of pop-rock are back as they embark on their European tour for the new self-titled album.

The Forum in Camden was already hyped after an enthralling performance from supporting act Guards, so as giant images of warped shapes and neon colours began to project onto the backdrop of the stage and a distorted voice spelled out the name of the long awaited band, delirium set in amongst the crowd.

Lead singer, Andrew VanWyngarden, took to the stage with a tambourine in hand before leading his band into a cover of Faine Jade’s ‘Introspection’. The jangly guitars and hissing shake of the tambourine combined with the swirling lights and distorted images made it feel like a magical, Beatles-esque LSD trip.

It wasn’t long either until the crowd were transported back to Oracular Spectacular days as everyone who wasn’t screaming with excitement joined in by mimicking the unmistakable sound of synths in ‘Time to Pretend’. But by playing such a classic song so early on, it left you wondering how they would keep it up for the rest of the set.

Mixing in fan favourites from FIFA games gone by like ‘Flash Delirium’ with new tracks that share the same twisted vocals such as ‘Mystery Disease’ and ‘Your Life Is a Lie’ assured that MGMT maintained the audience’s attention.

But when the pace of the gig was slowed with songs such as ‘Siberian Walks’ the audience were lulled into a false sense of security before being hit with the now legendary tracks ‘Electric Feel’ and ‘Kids’. The euphoria inside the grand venue was contagious and no matter how many times you have heard these songs, the atmosphere and spectacle took it to into a whole new dimension.

MGMT are well and truly back.