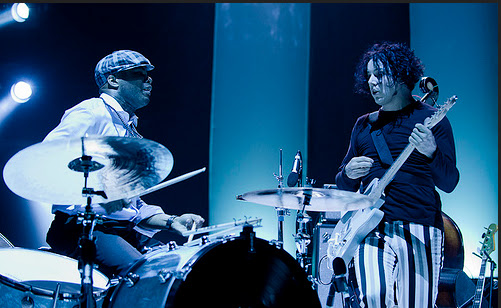 Before we get to the main event of the evening there were of course two rather special sisters on stage mesmerising the crowd with majestic folk rhythms that take the form of alternative country. These two sisters are Johanna and Klara Söderberg who’s voices perfectly harmonise in such a way that it is haunting yet beautiful. It was an absolute pleasure to witness live, they paid homage to fellow Scandinavian Fever Ray covering ‘When I Grow Up’.

He may take to the stage – tonight with his seven piece all male backing band – with what appears to be a cucumber stuck down his grey, black and white striped spandex bottoms (I kid you not) but from a raucous opening rendition of ‘Black Math’ onward, there’s no mistaking who the number one blues man of his generation is, and that he has something to prove.

The set list is, obviously, Blunderbuss heavy, but the material slots neatly into the progression of Jack’s career – which has steadily been adding instruments as it goes along. Backed by a full, and frankly shit hot, band, Jack finally has the space for his ideas to go big and full on. The addition of lap steel, mandolin, fiddle and honky tonk piano look terrible on paper, but sound great. That’s not to say that the guitar ever really takes a back seat at ay point.

Regarding the back catalogue; an almost skiffle version of ‘Hotel Yoba’ (from 2001) – though met with frenzy by the crowd – doesn’t sound as good as the original, but the more full on White Stripes songs, such as ‘Ball and a Biscuit’ and ‘The Hardest Button to Button’ are given a new breath of life and sound revitalised.

Jack also throws in other cuts from his rapidly mounting back catalogue, including ‘Top Yourself’ by The Raconteurs, the more low key ‘Two against One’ from the ‘Rome’ album by Danger Mouse and Daniel Luppi, and The Dead Weather’s ‘I Cuts Like a Buffalo’ – which in the hands of tonight’s band becomes a huge blues rock monster, and one of the absolute highlights of the night.

Tonight is as good as any White Stripes show we’ve seen, and leaves no doubt that Jack White is not just the premiere blues renaissance man of his generation, but in fact a real, hard gone, goddamn guy who LIVES the blues. And based on that we can’t begin to even imagine how good he’ll be when he’s 60.