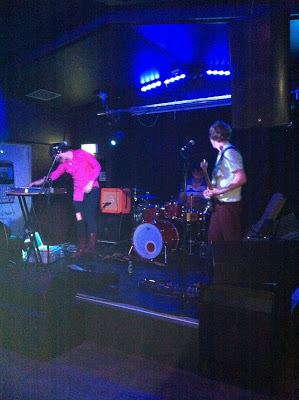 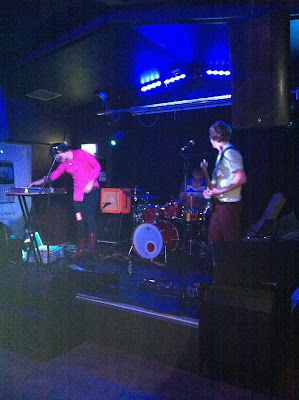 First up fiN, a band we’ve been hearing a lot of hype about recently. The Wandsworth four piece (although they play as a five tonight) really kick the night off with a bang, instantly grabbing the already swelling audience closer to the stage. Singer Luke Joyce’s vocal is the real one to watch here, his power and range cut through the music to deliver a style which certainly has its roots based in Indie although also lends to a ‘rocky’ live sound. Comparisons to Mansun are not unfounded and we are pleasantly surprised as their set closes with a crescendo of noise and aggression with guitars being strewn on the floor. fiN would certainly prove a very hard act to follow on any other bill but luckily that’s not what Citizens are going for. They avoid the sing-along swagger of the previous act and instead focus in on an entirely different kind of set. Bent over their respective instruments they calve out a much more visually somber affair however their personal blend of ‘math-rock’ gets the audience moving (if not the band).

They have been handpicked by tonight’s headliners and have a sound reminiscent of early Foals circa ‘Antidotes’, a blend of angular dance indie that leads us perfectly in tonight’s main event, Flash Fiktion who treat us to a run through of their newly launched self-titled album.

Opening with the debut album track ‘Me and Mr E’ we are instantly met with hypnotic World percussion drums, infectious guitar riffs and layers of synth that leave us itching to dance along to their ‘dutch pop’ resonance and within 30 seconds a crowd forms dancing in front of the stage. The next track ‘Capsules of Son’ is one to listen out for and one that we will no doubt be hearing in Indie clubs galore some time in the near future. After the initial opening tracks the band experiment with their sound and genre taking on a more mysterious tone in the track ‘The Rapture of Your Design’ and gloomy vocals of ‘176’ that are overcast by an intense guitar and bass.

We hear hints of a darker math-rock genre in ‘Leni’ and ‘Science of Your Sleep’ which proves that the band are capable of exploring a profound sound that matches up to their ominous lyrics. The most successful live tracks feature the up-beat, addictive sound that ultimately defines the band and although they appear out to prove they are not a one-track artist the audience seemed to agree that the indie- dance-pop tracks are what Flash Fiktion should be all about. Encompassing hints of other successful electro-indie dance acts such as Friendly Fires, The Rapture and The Klaxons, Flash Fiktion bring their own unique twist to the genre largely thanks to lead singer Matt’s vocals which blend with the bands synth seamlessly. Surely this is another dance-indie act destined to succeed? 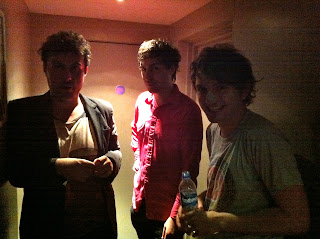