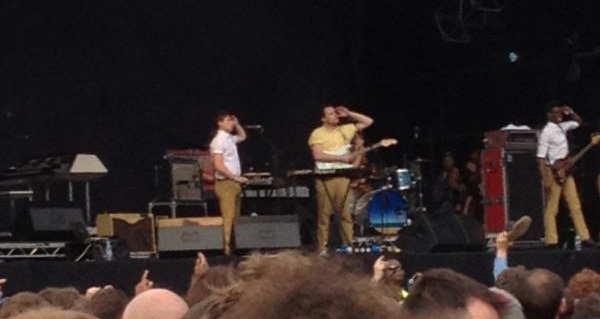 Field Day seemed much bigger, more stages, more stalls and as we took to the grass for a bevvie the sun came out, would you believe it! Late for Django Django the best we could do is get a glimpse from outside the tent, there was no way of getting in, hearing single ‘Storm’ we were slightly satisfied. ‘Zulu Winter’ played a decent set on stage at the Shackelwell Tent and although they remind us of Wild Beasts the music is clever and dramatic with their final song ‘Silver Tongue’ our highlight.

‘Spector’ dazzled on stage in their tailored suits and were surprisingly aggressive putting on a strong performance. ‘Metronomy’ over at the main stage played to a huge crowd but like many main stage bands the sound comes and goes depending where you are stood. Passing a man sitting and staring into the sky, clearly reflecting on his new enlightenment, hundreds walked by as we headed to catch TOY. How do they do it? TOY were simply epic. The noise that erupted from the stage in an endless swirl of soaring melodies and instrumental rock outs was incredible to watch, ‘Motoring’ especially.

As the rain started to fall we made a dash for an after party. Had we seen all eleven bands on our list? No way in hell, but the festivals was amazing TOY and Crocodiles stealing the show. The drinks still a bit of a rip off but we’ve said it before and we’ll say it again, get on that recycle incentive, the floor is literally pathed in 10p’s.