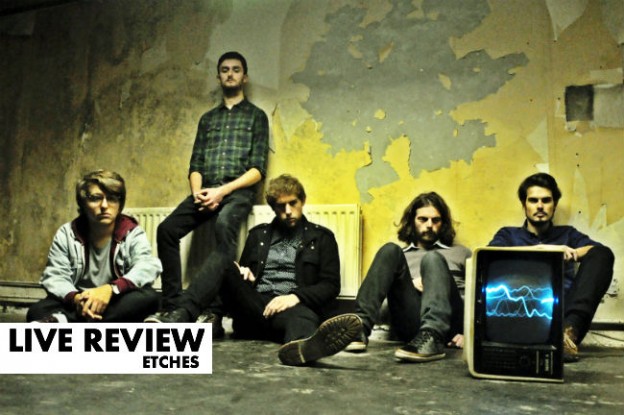 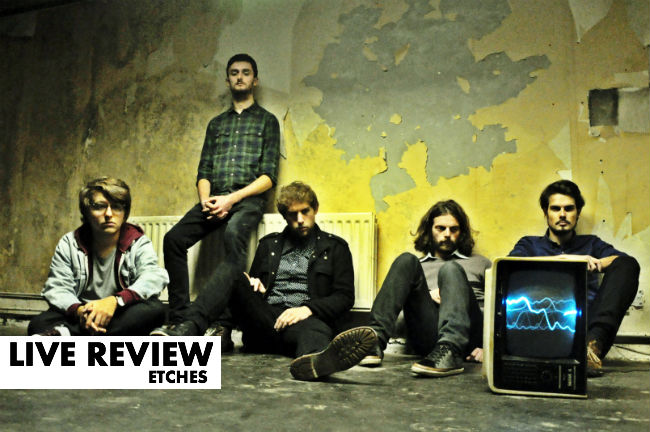 You know it’s bound to be a good one when the moment you set foot into a place, somebody spills their beer all over your jacket. That’s why when we walked into Sebright Arms’ crammed basement for electro post-punk Etches’ single launch, we were filled with thrillingly high expectations.

Opening act Over Sands were already jamming on-stage, bewitching their old-school hipsters audience with a crescendo sequence of genuinely soul-capturing tunes, permeated with a certain sort of outer space solitariness. Perfect mood-setters, they played the entirety of their set with sublime artistry.

The air was then swirling with anticipation for the main act to come on stage and the Liverpool fivesome didn’t wait long enough for it to dissipate, grabbing that exhilarating vibe and taking it to exquisite heights shortly after.

Despite the fact of having released their first demo ‘Let’s Move In’ last October, Etches have gained a relevant level of exposure already, with airplay from XFM, Radio 1 and Amazing Radio.

A band who’s not afraid of pushing boundaries between electronica and 80’s guitar rock –Joy Division and Pixies come to mind, they mix and match these two genres with splendid expertise, being able to carve unforgettable anthems.

They performed their 45-minute set with great ability, storming through sophisticated arrangements and heart-thumping melodies alike, finally concluding with their launching single ‘A Charm Offensive’, truly inflaming the sold-out room.

Releasing their single via Club.The.Mammoth., Etches spent the last part of 2013 in the studio with producer Al Groves (Elvis Costello, The Zutons) and are now more than ready for greater things to come their way.

Sebright Arms was the perfect setting for Etches’ single launch, its cozy atmosphere making them shine through it all.

If you still haven’t seen them live, be sure to catch them on one of these dates: