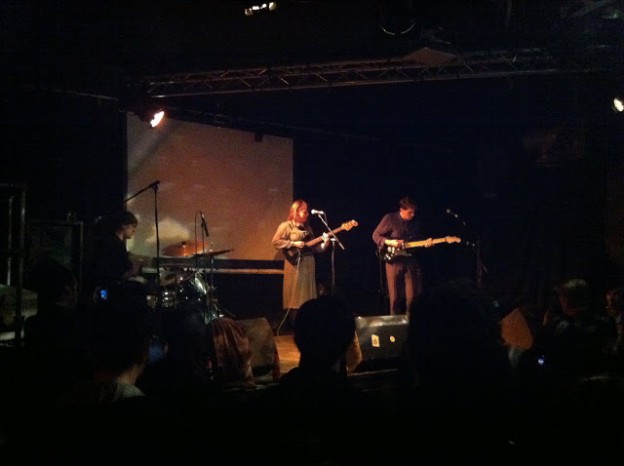 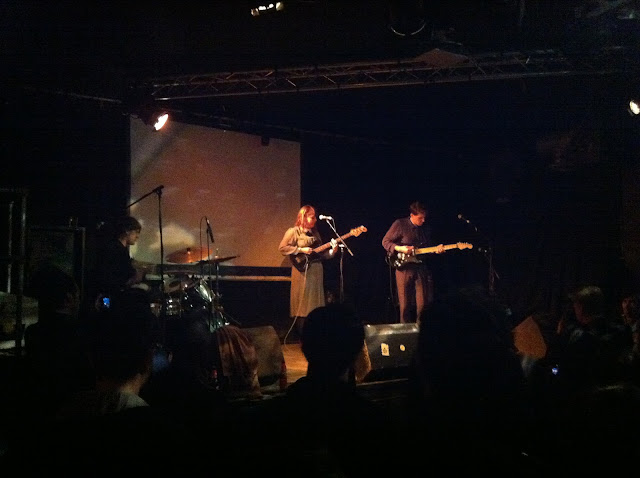 The Sticks kicked off the evening and a few songs into their set we had high hopes for the Brighton trio as they blasted out short bursts of noise so obscure and exhilarating that it can only be described as well-constructed musical mess. Mid-set it started to feel like the band had missed one too many a rehearsal, at one point the drummer forgot his part of the song for several minutes resulting in a band run-through in front of a cringing crowd. This may or may not have been a result of attempting a huge set with each member alternating instruments every few minutes. The crowd remained supportive despite the run of technical errors/mistakes and memory loss and the front man salvaged the performance and seemed to direct the show. We like The Sticks’ unconventional style and modern-garage sound but in terms of live performance the deliberately bad show left little to be impressed by.

When we heard that Gina Birch was supporting EIOH we were rather excited at the opportunity to catch The Raincoats legend’s solo set. She rocked out many a classic Raincoats track, which she simply fashioned from enchanting vocals and a backdrop of heavily distorted guitar. She finished with The Raincoats ‘Babydog’ (you know the one about the dog child that gets pushed around in a pram… and taken to the park to make doggy friends) and suddenly we had fallen back in love with The Raincoats all over again.

Following a run of sold out single releases and a recent signing to Fierce Panda there are big expectations of Electricity In Our Homes’ latest single ‘Aching Breaking Shaking For You’. After hearing it live along with the B Side ‘Drumming Around the Room’ we are reassured that this release will be a sell out too. The entire show was as beautifully executed as it was planned. Frontman Charles Boyer exuded the same sense of care and diligence through his performance as the band put into each release. His voice filled the room with a great sense of nostalgia, think experimental punk such as Public Image Ltd. and Magazine. Add to this 1940’s allure, which radiated from bassist Bonnie Carr and bind it together with Paul Linger’s modern-mash of eccentric drums and you have the contemporary EIOH sound that has grown since their EP release two years ago. EIOH played tracks from their still to be released debut album ‘Dear Shareholder’ due out this autumn. Good things do come to those who wait…