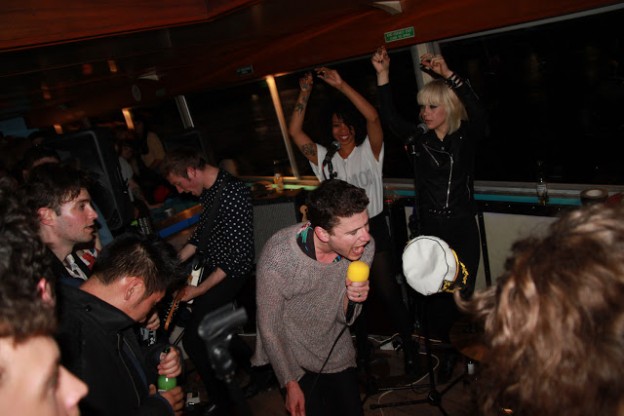 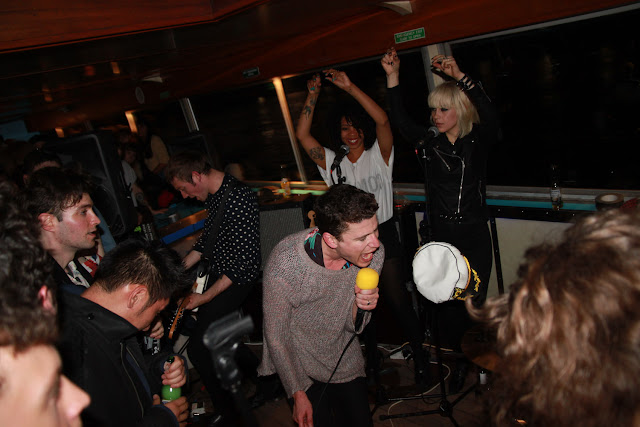 Support came on the night from Sexbeat favourites Virals and the hotly tipped Weird Dreams, with the Dum-Dum girls and Male Bonding both playing some records between sets. Crocodiles had played Hotel Street the previous evening and the main deck promised to be an even more intimate occasion than this, with the barriers between the band and crowd well and truly broken down.

The Royal Princess set sail shortly before 8pm whilst tourists on passing river tour ships waved enthusiastically at us, as the ever-changing banks of the River Thames provided a spectacular backdrop for the event.

The captain had cut short the sound check earlier in the day raising his concerns about the volume of the music on his ship yet neither the band or fans seemed to care about this as Virals, The new slacker rock solo project of Shaun Hencher (formerly of Lovvers), took to the stage for the first performance of the night. Hencher treated us to hits off of his recent EP ‘Coming up with the sun’ and although the sound wasn’t great, him and his band still put in a lively performance with everyone cramming around the makeshift stage area in the middle of the deck to watch. 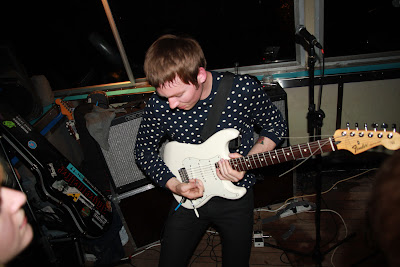 The crowd thinned out slightly as Weird Dreams brought their hazy washed-out pop music to the deck next. They performed songs from their new album ‘Choreography’ as the boat drifted through central London past the illuminated St. Pauls Cathedral and the London Eye. The melodic guitar riffs and melancholy vocals combined perfectly to create a real richness of sound and it was only a shame more people weren’t watching this set.

Crocodiles took to the stage around 10.30pm and the crowd seemed to come to life for the first time in the evening, as they performed tracks from their new album ‘Endless Flowers’. It is the Californian band’s third studio album and first as a quintet since they’ve added drums, bass and keyboard to their live shows, a move which has developed their sound greatly, however without losing the trademark skuzzy guitars and echoing feedback of the previous 2 offerings.

The crowd were rocked from side to side by both the band and river as distorted guitars and fast-paced drumming echoed around the boat with the band becoming immersed in the crowd at times as the make-do stage failed to separate them.

They ended the set with a raucous rendition of fan favourite ‘I wanna kill’, which prompted a mass sing-a-long and provided an apt ending to a memorable gig. The new songs all sounded great on the night and the boat cruise created an occasion which nobody there will forget in a long time and will hopefully be the start of much bigger things for the San Diego outfit.