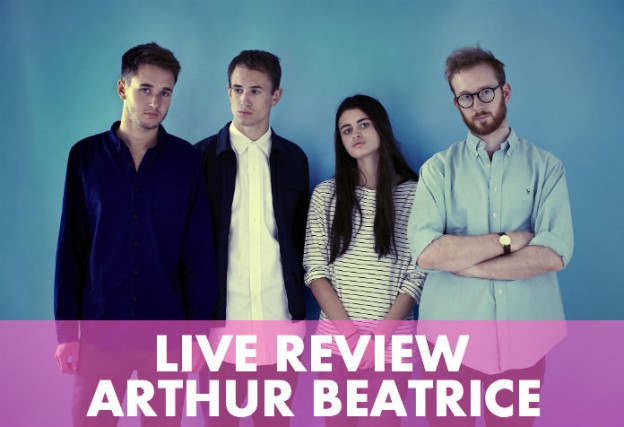 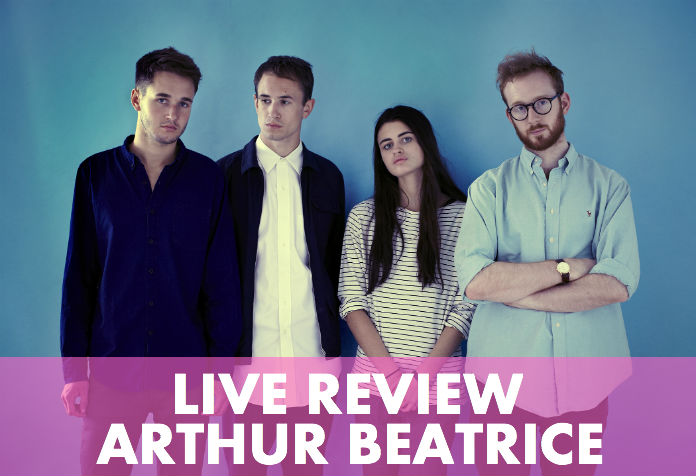 Everything about Arthur Beatrice is nice and tidy. Their album Working Out, out now on Polydor, is full of neat guitar hooks, rolling bass-lines and swirling, accessible melody. It’s a beautifully restrained album that sounds as though it’s been toiled over. It’s a fitting title for a pristine, considered debut.

This aesthetic is mirrored in the album artwork; all clean lines and neutral colours. I’m expecting more of the same tonight as I shuffle into Rough Trade East for this Monday night album launch show. What’s refreshing about the performance, though, is that the songs take a slightly different shape when played live. Things are a lot more lose; the shackles of the recording studio have been shaken off.

Album stand-out Carter’s ghostly, atmospheric key-board intro is gone tonight. Instead, Elliot Barnes’ thumping drums get us started; sounding almost like a runner’s heels hitting the hard ground as he gathers pace. Barnes’ drumming is firmly rooted in jazz and sometimes even teeters on the brink of R&B and Hip-Hop.

As a whole, Arthur Beatrice’s influences are laid bare tonight. Ella Girardot joins in on vocals. At times a high, Natasha Khan-esque howl; at others, bluesy, warm and plush, Girardot’s voice washes over an enthusiastic audience. Multi-instrumentalist, and brother of Eliot, Hamish Barnes injects some keyboards and lightens the mood. It’s evident that Orlando Leopard’s classical background keeps the performance together and adds the polish.

There’s a slight change in staging for Midland as Girardot shifts to the keys and Barnes junior assumes his position left of stage, his guitar hanging low against an immaculate white shirt. “All I want is to be warm at home” sings Girardot, backed by Leopard’s hushed vocal, his bass-line rolling and driving the track into a lively chorus.

“This is an old one,” Ella Girardot informs us before a beautiful rendition of Charity. Leopard takes the lead vocal here and it’s a lovey touch. He makes a charming front man and seems comfortable in the role. With a voice that’s reminiscent of Anthony Hegarty he croons: “With all indifference/I’ve seen too much to call it luck.” Leopard’s rich and sumptuous vocal coupled with some neat guitar licks and Barnes’ jazzy drums make this the highlight of the night.

Not for want of trying, you get the impression that Arthur Beatrice could really start a party if given the right time and place. Sadly for those sandwiched between Rough Trade East’s aisles, here and now is not quite right.