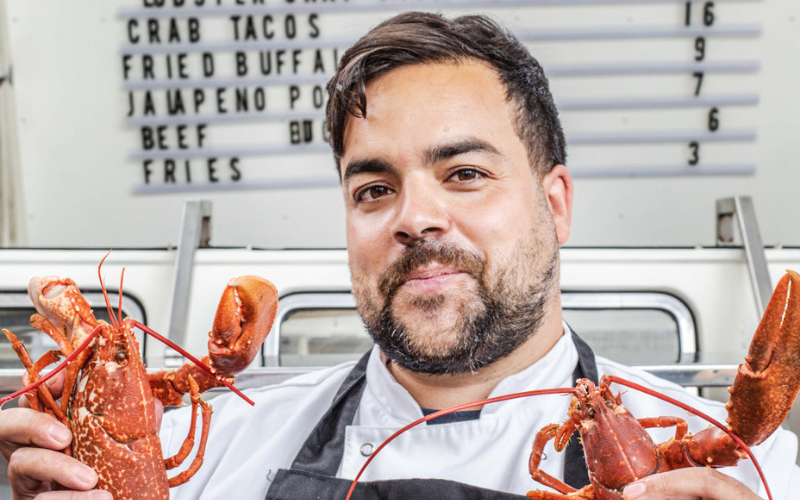 From Applebee’s Fish to Shellseekers and Wright Brothers Oyster and Porter House, Borough Market has its fair share of seafood vendors, though none quite like this one. Little Lobster Bar that specialises in…yep, lobster and will be dishing out our crustacean friends in a number of forms. Their leading lady, the lobster and crayfish roll – a brioche bun overflowing with lobster claw, tail, knuckle and crayfish with rapeseed mayo house and celery salt, will be the one most of you want to get your hands on. Though, if you can’t stomach spending £19 on lunch there’s also a lobster mac and cheese with three kinds of cheese, topped with crispy shallots and fresh oregano as well as a golden deep-fried ball of lobster arancini with sun-dried tomato tapenade and fresh chives on the menu. Other, lobster-less dishes include crab tacos, shrimp roll and crab croquettes and fries, guacamole and tortilla chips making up the sides options.

The menu has been carefully curated by co-owner Rob Dann and created by Head Chef Irene Barriga-Rodriquez and will be distributed from an original 1957 Vintage VW split screen converted Campervan called Ruby. Just when you thought it couldn’t get any more decadent, there will be a range of Champagnes on the menu including Champagne Laurent-Perrier, La Curvee Brut NV and Curvée Rosé both by the glass along with crowd pleasers like Prosecco, Pimms, Aperol Spritz, Negronis and frozen Margaritas, as well as a good range of beers and Van-made southern style lemonade.