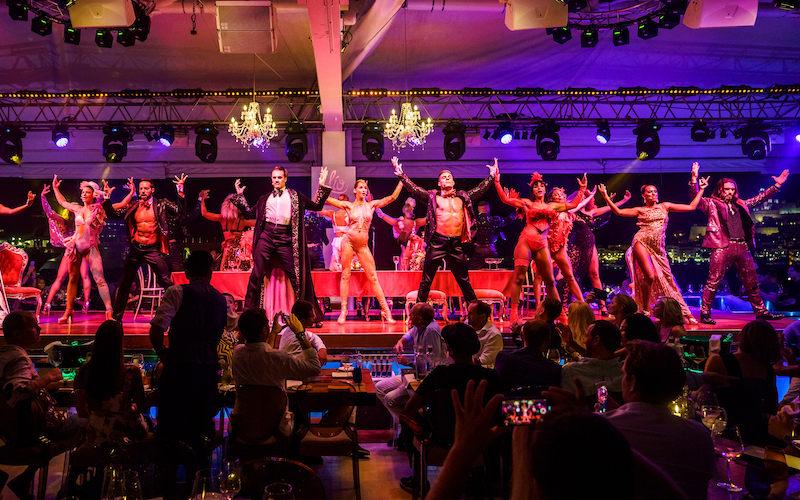 Ahead of club Lio Ibiza coming to London next year we flew out to the island to experience the original for ourselves. For those who aren’t familiar with Lio, it’s one of Ibiza’s most exclusive clubs, set by the seafront surrounded by yachts –  it’s no surprise that it’s often full of the rich and famous, including the likes of Beyonce and Jay Z. Opening its doors back in 2011, the restaurant and club is host to 50 different cabaret shows and club nights with the biggest names in the business throughout the summer.

During our time in Ibiza we were based at Hotel Destino, which like club Lio is part of the Pacha Group, although it’s subtly branded with only a few of those recognisable cherries making an appearance. Set by the sea near the old town, the rooms were typically Mediterranean and spread across mini villa style white houses around the complex.

The hotel itself has a large pool, two jacuzzis and sun loungers which over look the sea and Ibiza town in the distance. We’d definitely recommend making it up for breakfast as the buffet includes a huge spread of pastries, cheese and meats, full English and cereals. This can be washed down with a glass or two of Cava which is also part of the buffet (hair of the dog for those who partied too hard the night before).

Destino also has a wellness centre which offers a range of treatments including massages, facials, blow drys and nails, everything to get you prepped and ready ahead of your night out. During the early evening of selected days the outside area of the hotel transforms into a club scene with DJs, face painting and plenty of dancing from the guests, making it the ideal pre-club party.

Next stop was club Lio itself. During dinner was a Cabaret show, a combination of burlesque, dancers, singers, clowns and live acrobats and is not restricted just to the stage. We’ll warn you that the cabaret is not for the shy and is quite immersive, having you on your feet dancing in no time.

Food-wise the sushi selection is excellent, along with the steak which was cooked to perfection. With the sponsor of the club being Dom Perringon there’s definitely no shortage of champagne and ordering a bottle turns into an experience, with a light up bottle and plenty of flares to wave around. If champagne isn’t your tipple there’s also the option to order a magnum of wine or bottles of spirits to enjoy all night long – which also come with flares…

Once midnight hit and the cabaret was over, the party moved to the dance floor, which has had a selection of renowned DJs playing including actor Idris Elba, who has had residency there every Sunday over the summer. The dance floor is relatively small in comparison to Ibiza’s super clubs, which gives it a more intimate, not too overwhelming feel.

Lio’s restaurant, club and cabaret lands in London on the 21st February for a six week pop up at the London Cabaret club in Bloomsbury square. Here you can expect everything from its original show in the heart of the city.

Tickets are £180pp and include a set menu and the live cabaret show experience. On Wednesday and Thursday evenings you can party till 2am and Friday and Saturday it will be through to 3am. If that’s not late enough there’s also four special events throughout the pop up which will be open till 5am. We’ll see you there.