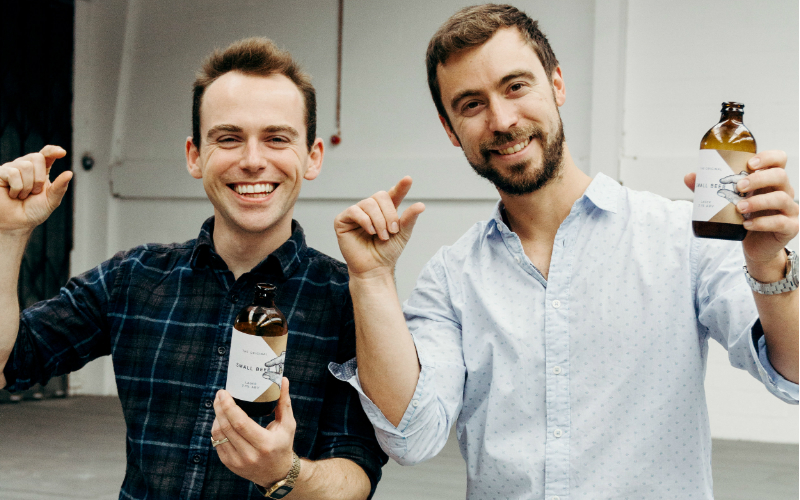 James Grundy and Felix James both have roots in the food and drink industry and both share a passion for beer, so they decided to team up and create the Small Beer Brew Co, opening the world’s first small beer brewery in Bermondsey earlier this spring. Don’t know what small beer is? Let James and Felix fill you in…

James: I live in Peckham, just off Bellenden Rd. I love the independent restaurants of which there any many! From Artusi and the Begging Bowl to Miss Tapas and Mr Bao. Favourite brunch spot, probably Spike & Earl. We’ve got some great stores the Village Grocer is one of those shops that has everything! For your beers, Hop Burns & Black your wine Bambuni, and your meat the brilliant Flock & Herd.

Felix: I’ve been living in Catford for six years now. It is the only place in London I have ever lived where I can genuinely say we know every one of our neighbours. There’s a wonderful community spirit, great local pop-ups, an arts trail and our very own beer festival!

How did you get into the drinks industry?

James: I started out in the wine industry and always found it fascinating how through so many countries wine acted as a social glue. Enjoyed between friends or at the table of a family you may have just met. The styles produced reflected areas, history, climate and food types. It always seemed to have so many stories to tell.

Felix: I’ve always been passionate about food and drink. I made my first beer (if you could call it that) age four by mixing bread yeast, sugar and water in a milk bottle. During my uni days, I worked at Borough Market on the weekends to make ends meet and experimented with fermented foods in the kitchen. It was then that I came across home brewing and the fusion of food and science blew my mind – the very next day I started brewing in pots and pans and built up my kit from there. It was that do-it-yourself mentality that landed me with a job at AB Inbev, then Fuller’s and finally Sipsmith where I met my business partner James.

You’ve set up the world’s first small beer brewery, so what exactly is small beer and why is no-one else doing it?

James: Small Beer was a staple in the country throughout the 17-1800’s, and was enjoyed by all from the working man & woman through to high society. It was even served in the schools due to the water quality at the time being so pour. It was always brewed at a lower strength between (0.5 – 2.8%ABV) and created as a second running’s after high strength beer had been brewed. Our aim was to brew beer that delivered truly great beer experience, delivering all of that flavour normally only associated with the higher strength cousins, but at the small beer ABV (0.5 – 2.8%). We’re all leading such busy lives, but still love having a great social beer. So we wanted Small Beer to deliver all of the enjoyment just without the slow down! We like to think it’s rooted in history, but made for today. Why is no-one else doing it? It’s actually very difficult to do well. We have designed our kit to specialise exclusively in the production of Small Beer, really flying in the face of traditional brewing which was all about maximising the amount of alcohol that you could create from your raw ingredients. What we want to do is maximise the flavours delivered by each of the ingredients whilst minimising the alcohol produced throughout the brew. We can’t actually brew big beer here at the brewery but we think we can produce the very best Small Beer that’s ever been tasted!

Felix: Small beer is beer that is brewed to an alcoholic strength of around 0.5-2.8% ABV. It has a rich history as a drink that was made at home for the working men, women and children of society until the late nineteenth century. As drinking water improved and brewing was industrialised, it fell out of fashion. In today’s fast-paced and health conscious society we decided the time was right to make small beer great again! We designed our brewing kit specifically for that purpose – at every step of the way we have opted for flavour over alcoholic strength. A long lagering period means the beer remains completely unprocessed to retain all of it’s natural body, flavour and aroma.

Sustainability is a big part of what you do at the brewery, talk us through how you’re doing it.

James: As we know it, we run the UK’s only entirely dry floor brewery and have managed to reduce the high quantity of water normally used, 8-10pints per pint of beer down to a 1.5pints. All of the electricity used to run the brewery is 100% wind, water & solar. Even our labels and boxes are 100% recycled. We know we’re only at the start of our journey, but responsible production is a core thread of our business.

Felix: Sustainability is a thread that runs through everything we do at Small Beer Brew Co. From our bottles to our boxes to our business cards, we always consider the full life cycle of our materials to ensure that they are not only sustainably sourced, but we’re also mitigating excessive transport and waste to landfill at the end of their working life. Our latest recruit in our team of four is Phoebe, our head of CSR. Phoebe’s main focus is on ensuring we never diverge from our founding principles and that we are continually asking ourselves what we can do to be better to the environment.

What are your three favourite beers and why?

James: I love a pint of Fuller’s London Pride, it’s one of those perfect Sunday Roast accompaniments. At the other end of the spectrum is the Sweet Water IPA, I came across it on a trip to Asheville a small town in the Blue Ridge Mountains, North Carolina. Someone there told me they have more microbreweries per capita than anywhere else in the world. There is quite literally one on every street! Sweet Water say their IPA is ‘hopped to the gills’. I wouldn’t drink a lot of it, but sometimes you’re just in the mood…And our Small Beer of course!!! It delivers such beautiful balance between the hop/malt characteristics.

Felix: Pilsner Urquell has to be up there for me. As its name suggests, it’s the origin of the Pilsner style upon which 80% of all beer brewed today is based. And yet it stands head and shoulders above its rivals. It taught us not to rely on what has come before. We would never be satisfied making a beer that ‘tastes great for its strength’. We know that Small Beer will stand up against the great beers of this world, irrespective of alcohol content.

Salopian Brewery’s Polygraph is a beautifully rich, silky stout with explosive chocolate and dark fruit flavour. I’m a big fan of dark beer, right the way up from milds through to imperial stouts. Our Dark Lager challenges the perception that a dark beer needs to be heavy. It has a tight frothy head and wonderful rich chocolate flavours and yet it’s clean and refreshing, just as you would expect a continental lager to be. Anyone who has been to Corsica will have come across the fabulous Pietra beer. It’s made with native chestnut flour which gives it a wonderfully nutty, rich mouthfeel whilst remaining clean and refreshing on the palate. It pairs beautifully with seafood and traditional Corsican soups and stews. It’s a testament to the fact that craft beer has been long in the making!

James:  It would probably be a Sunday (we work Saturdays). My partner & I would go for a hearty breakfast at Anderson’s in Peckham. Then head over to Columbia Road, pick up a coffee & walk through the flower market, then to lunch at The Clove Club. After that we’d head into town, stopping in a gallery then sit for an early evening cocktail at the Balthazar bar. Brian Silva there mixes down a stunning aperitif. Dinner at Portland, it’s relaxed but always delivers such an exciting menu. Then back to Ronnie’s Bar above Ronnie Scott’s for live music & dancing into the early hours…

Felix: As the warmer weather approaches I can’t wait to invite our friends and neighbours round for a garden party with the kids. There really is nothing better than cooking on a roaring fire with a cold glass of beer in your hand.