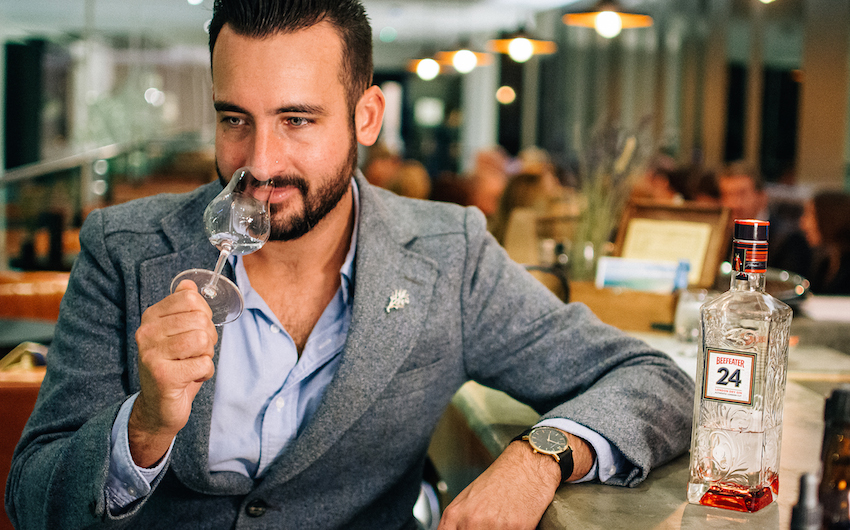 I’m based on the cusp of Dalston, Hackney Downs and London Fields. It’s a great place to live. Since day one of moving to London I’ve always lived East. There’s so much going on and it’s full of people doing cool stuff.In the summer the parks are buzzing, especially the BBQ area at London Fields. It’s become a bit of a tradition that I do a big cook up one Saturday every summer, the meat cuts are pretty hefty and the gin flows pretty liberally. I love that you can walk one way and rock up to Ridley Road market and get some silly deals in a part of London that’s still a bit raw. You go the other way and you get to smart, polished yet funky Broadway Market and find some nice threads and super tasty street food. The live music is second to none compared to anywhere around the world. Gigs and parties arrive on a conveyor belt.The food in this area is off the radar, you can never be bored. Recently the cocktail bars have taken a step up too. Ruby’s has always been one of my favourite haunts, Three Sheets is serving up some of the tastiest drinks in London and although (*sobs uncontrollably*) Dance Tunnel has gone, Ray’s has arrived as a good late night spot to sink Negronis and smash a pizza.

Tell us more about the Gin Journey…how did it come about?

The Gin Journey is basically the world’s best posh bar crawl. We take a group of around 20 guests on an afternoon or evening out where they visit 5 serious spots, including a distillery. Drink 5 different gins and 5 gin cocktails, learn all about gin and have a lovely time. Doesn’t sound too bad right? I used to be a bartender and I was always looking for something cool to do as a little bit extra. I started putting on different gin-themed events and loved it. I come from a family of teachers and thought I’d make a good one but my Pops always said ‘Whatever you do don’t become a teacher’. So I thought I know I’ll teach people about gin, serve up cocktails and charge them for it. Luckily it’s turned out alright so far.

You have now launched in other cities, tell us about that and the plans you have going forward?

I started things in London in August, 2013 after moving here just four months earlier. Now we roll in Manchester, Liverpool and Edinburgh too. Currently, it’s all about London again, I want Gin Journeys in every cool district that London has. Gin has become localised just like it used to be in the late 1800s I want the Gin Journey to mimic the recent gin boom London has seen. I want to tell the story of gin’s connection with this great city and the areas within it. Lots of work to do, but it’ll be fun work that’s for sure!

We also have a Journey focused solely on one of my favourite cocktails. The Negroni Journey. You guessed it, just like the Gin Journey but with that beautiful red beast as the lead character. If gin is a religion then the Negroni is a cult. People are mad about it, just like me. A real labour of love this one.

When you’re not hosting tours where do you like to drink?

Oh I’m always hosting… Believe. Too many to mention but I’ll give it a shot. The spots I mentioned earlier are my local cocktail dives. I also adore the pubs around the area. Can’t beat a Guinness in The Spurstowe or a red wine and a Sunday Roast in the Prince Arthur. If I’m going into town Bar Termini and Swift are absolutely cracking, Blind Pig makes top bevys as do all the JAtherton joints. Hawksmoor Spitalfields has recently won my heart back with its bang on cocktails and ridic bar food. Callooh Callay is right back to its former glories and attracting the hospitality workers just like it used to. A seriously fun place to hang out. Peg + Patriot in Bethnal Green is forever bending the rules and showing off super cool stuff and 69 Colebrooke Row for understated, Film Noir liquid perfection. If I’m feeling flush I find it hard to resist a pop into Mayfair for the Connaught, the Fumoir at Claridges and the Savoy (either bar). I try and save these high-rollers for a December jaunt when my Mum is in town though – your mates and the tab can get a bit silly. Little Christmas tipple at one of these works a treat mind.

This city has so many different sides that can offer so many different amazing days. But my favourite day in the London calendar year has to be carnival. A weekend where the whole of London comes to life seemingly in one borough. The music, the food, the colours, the people and the flavour all make what is an amazing time of the year. Even when I didn’t live in London I was travelling down every year and I think it’s what made me realise what London is all about. Not the ‘just too busy’ train stations that anyone who’s not from London moans about but the freedom, the music and the ability to put on a seriously good party. Carnival is what inspired me to get down here and try it myself!