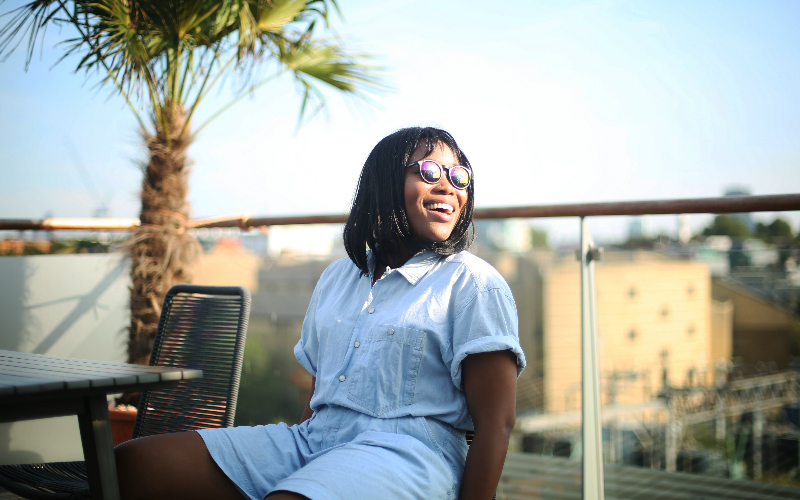 Nicole Logan is the head station manager at the newly-launched Transmission Roundhouse radio, which is all about giving a voice to the UK’s youth. Not only is the station led by an all-female management team, it’s broadcasting a range of radical, experimental and underground content. Here’s how Nicole is taking over the airwaves…

I’m primarily based in Stratford, under the glow of a certain large shopping centre and an even larger stadium. I was born not far from there in Whipps Cross hospital, so it all feels like my old stomping ground, yet over the years it has changed beyond all recognition. Saturdays outside the station, Stratford becomes one of my favourite places in the world, it is so overwhelming and yet still feels like family, you’ve got outreach teams from Islam, Christianity and Judaism with stalls, groups of lads beatboxing, someone else busking with a guitar, your friendly neighbourhood paintball company wanting your money, groups of friends waiting to kick start their weekends, all walks of people and shades of life. Just like that scene out of Love Actually…it really is all around.

How did you first get into radio?

I had done some radio at my student station in Canterbury (CSR FM) before graduating and deciding that I actually wanted to get into TV and/or theatre. A couple of baptisms of fire later, in the form of gruelling unpaid internships and some particularly hard TV production jobs, I realised those worlds and mediums weren’t for me, I didn’t fit in with the crowd that worked in them and I didn’t want to. I met my now Senior Manager about 3 years ago in a women in audio networking event in a pub outside of broadcasting house. She was a radio producer who had just got a job at the Roundhouse and I was making radio on the side for anyone who would let me, in a nutshell she totally took a chance on me and my ability and I’ve been trying to prove myself ever since.

Transmission Roundhouse radio launched this March, tell us a bit about the station and what it aims to do.

Transmission Roundhouse is an audio platform which aims to pioneer radical speech radio for under 30s, alongside some kick ass specialist music and non-commercial tunes. The shows we’re really excited about are the likes of Project Pleasure; a show that debunks the taboos around ‘doing the nasty’ and Deeper Cuts; a modern jazz show for those who think they don’t jazz (but secretly they love it). We want to cut through all the noise that can be found on the internet and provide under-30s with an accessible, playful and intelligent place to get their news, music and culture – fake news free.

What’s the programming process like? How do you choose presenters and decide which slots they get?

In terms of picking presenters, primary factor is ‘do we have a similar vision for what radio could become and are they ambitious enough to try and make it happen’. As the roles are voluntary, we invest in our presenters, their personalities and their career development in terms of mentoring, coaching and tuition, we want them to be able to make the sort of radio they wouldn’t be able to make at larger broadcasters, take risks and challenge themselves to think abstractly. As with all mediums and art forms it’s content first, is the show idea ambitious, engaging and radical enough? The nature of the show will dictate the show slot; it has to make sense alongside the audiences’ day. We’re going to do a public call out for new shows in late March, that will go out across our social media platforms @Transmission_RH. The process is pretty simple, it’s a written application followed by a coffee and then a couple of demos, so we can get a sense of each other and see if it’s a good fit for both the station and the presenters.

The station has an all-female management team, how important was it to have that level of representation for women in senior positions?

Femme (a term I use to include trans, cis and non-binary people who identify as feminine) representation in audio is still sorely behind where it needs to be, to truthfully reflect its audience. While I think there has been some brilliant work by the likes of Sound Women and Audio Grrls (can be found on Facebook) to change the roles of femmes behind the mic, I am so bored of walking in to offices, events and stations and finding yet again cis-men in management roles, deciding and influencing station atmosphere and what is ‘good’ radio. It’s dated, past it and so totally 1997. Apart from Miia Laine at Soas Radio and Harriet Taylor at Radar, I rarely come across another womxn heading up stations and with so many popping up across the country, it’s only logical to have more incredibly vocal womxn in senior strategic roles. But in order to make that happen we have to start training womxn to take on those roles and build up their experience, I was lucky to have someone do that for me and so I’m passing it on.

Okay so I really based my whole day around food! Starts with a lie in, before doing the 30-min walk through the Olympic Park and down the canal to Hash E8, my favourite café in Hackney Central. I’d have a stack of their white chocolate banana pancakes, then I’d see a film (and by film I mean Black Panther) at the Genesis Cinema in Whitechapel, before heading off for a kick around with all-femme football team Romance FC in Hackney Downs’ Park, then a carb heavy dinner at my favourite Thai Café called the Pie Crust in Stratford. It’s bring your own bottle and it’s heaven! Followed by trying my best to vogue at Pxssy Palace at Mick’s Garage – peak East London and I adore it.