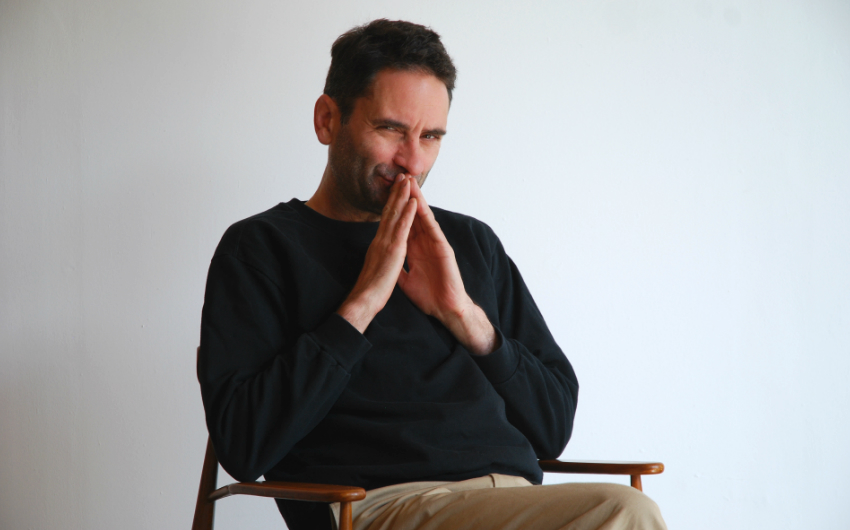 Our latest LDNER has worked at Barfly and the Hard Rock Cafe and set up his own streetwear brand APN, and now he’s moved into the world of spreadables by creating Jackpot Peanut Butter, which is not only the most rock & roll peanut butter in the land but is actually helping music venues in London stay open. Meet Rupert Leigh…

I live off Chatsworth Road. The thing about Homerton, you mention it the first time and no one knows truly where it is, is a blessing in many ways. It’s a 5 minute ride to Victoria Park, Broadway Market, 10 to Upper Clapton Road and only 40 minutes into the centre of town, easy.

You’ve gone from making streetwear at APN to making peanut butter, how did that move happen?

Jackpot Peanut Butter started life as a fictional brand logo on a T shirt and we made it real. My clothing company A Public Nuisance (APN) was inspired by legendary skate photographer and writer Craig Stecyk, who described how skateboarding, when it began in Southern California, was perceived as a public nuisance on a par with fly tipping. I imagined a brand that might inhabit that subculture, wholesome and enthusiastic but with an subversive edge, and Jackpot was born. The idea evolved into making peanut butter for real, originally to promote the clothing line but then Jackpot began to take on a life of its own and is now growing distribution across London week by week! 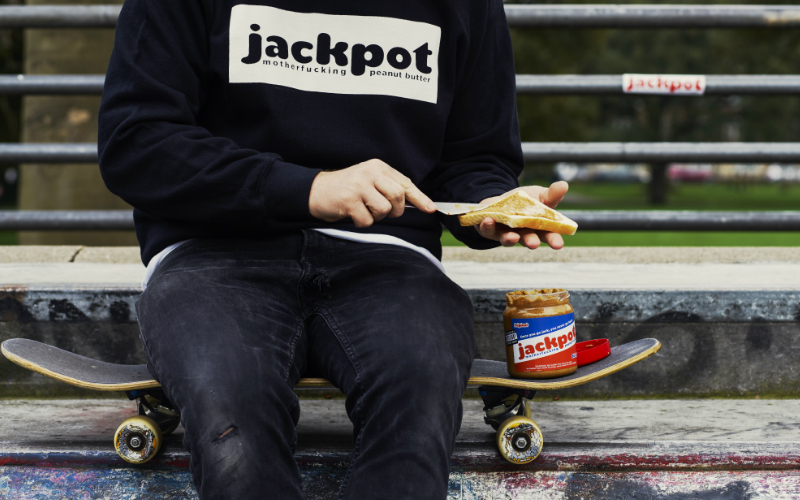 What makes Jackpot so rock & roll?

I don’t really look at Jackpot in that way. I think culture is refreshed and moves forward when ideas from the fringes get adopted by the mainstream, and Jackpot is approaching the grocery aisle with a philosophy that’s worked in all sorts of independent scenes like music, fashion and skateboarding. There are four of us in the team with a background in bringing together brands and music, so it was natural that the brand would evolve from the subcultures we know and love. Maybe that’s a rock & roll revolution for the supermarket shelf, but we’re just setting out to make great peanut butter.

You’ve signed up to support the Music Venue Trust. How is peanut butter going to help grass roots venues across London stay open?

We recognised how peanut butter had always been welcomed into live music culture: Elvis famously consuming industrial quantities until he left the building, Iggy Pop smearing himself with the stuff on stage and its constant presence on band riders from Aerosmith to Zappa. We felt Jackpot should step up and support the relationship. Times are increasingly tough for London’s venues, 35% have been lost in that last 10 years and commercial pressures continue to grow. We’ve partnered with the Music Venue Trust who are working tirelessly to keep grass roots music scene alive, so as well as preserving peanut butter’s role as the classic backstage band rider, we can lend a hand in preserving one of the independent scenes we love.

For instance, we’re speaking to a number of venues to collaborate on limited edition jackpot products, from towels for the bands/artists backstage, limited edition jackpot peanut butter labels and merch. We’ve also been working on a jackpot peanut butter flavoured bourbon for a venue in North London. We’ve partnered with the MVT as it’s both of a personal and professional interest for us all, we keep abreast of what’s going on if it affects a venue, how we can heighten the profile of the MVT to ensure more people know of its work and what it stands for. We’re passionate about music culture, it’s how Richard, Dave and I got into this in the first place 15 years ago. 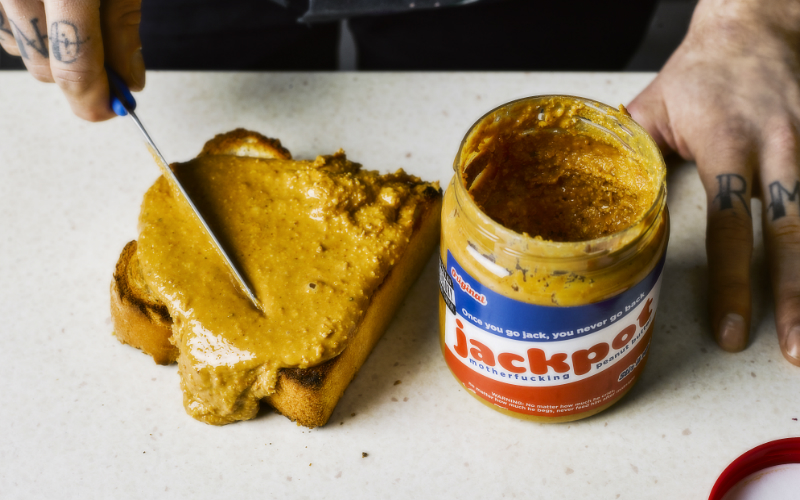 I like to stay local during the weekends, close to cycle around Victoria Park as it allows me to pop over early doors before the rush and for some solitude at my friends vintage furniture store/coffee shop The Peanut Vendor (Gunmakers Lane) for my first filter coffee of the day and to catch up with the week. Local food shopping is on Chatsworth Road, it’s still a local community high street, some changes but not too much that it’s noticeable. It pretty much has all you could ask for over the weekend, food shopping wise, with an added bonus of the food market on Sundays. It’s worth a lunch at the Convenience (Brooksby’s Walk) an old public toilet, a simple menu & wine list, the terrace restaurant detaches you from the every day. Afternoon drinks at The Gun (Well Street) if anyone is kicking about, probably one of the best bars in Hackney right now, long may it last. Finally The Castle Cinema, an independent has just opened above the EAT17 on the Chatsworth Road that was actually the local cinema years back. Should the movies not be up to much, they’ve had the decency and fortitude to include a cocktail bar, a 1920’s New York style affair, sitting at the bar, over an Old Fashioned. Evenings are another story…