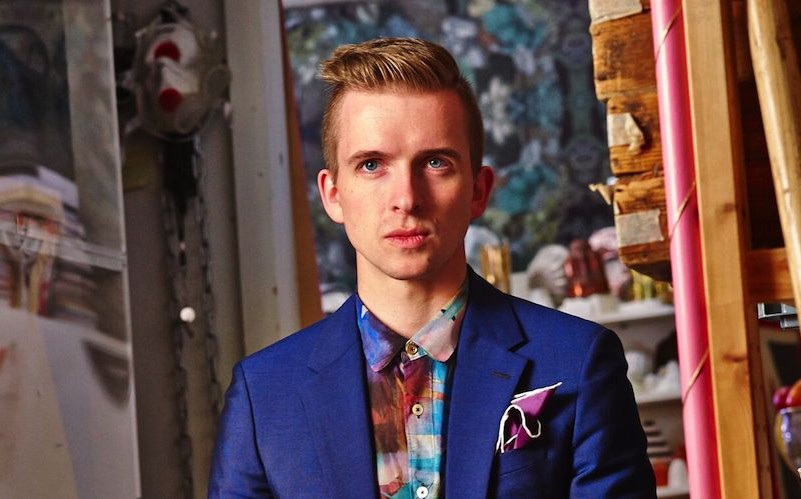 Bompas & Parr have made quite a name for themselves, creating weird and wacky flavour-based experiences, architectural installations and food pop ups and this week’s LDNER is one half of the crazy duo, Sam Bompas..

I’m a Southwark native, born in Guys Hospital and still living close by. Tortuga, my current house behind the Tate Modern, has been my home for around 12 years so the area has a richness of texture layers of personal memory intermingling with local lore, like the historical sex ghosts of Southwark, the Roman sacrificial wells and the sawdust floored Boot & Flogger – once the only place in London to be able to serve alcohol without a license as the owner was a member of the ancient guild of Vintners.

Living somewhere for so long means you become well acquainted and enthusiastic about the local players and characters. I’ve worked in the constituency and parliamentary office of the local MP, a stint that saw the organization of an exorcism for one of the constituents. She thought her house was haunted and the MP was the only person who could help! Though that was over a decade ago, we are still doing a fair amount in the area to give locals more spiritually textured lives. Though I’m not particularly godly we’ve recently made a film to help Southwark Cathedral raise money for the restoration of their impressive organ. My grandfather was a trustee of the cathedral and it’s fulfilling to continue the relationship and support.

At Bompas & Parr we also do a fair amount with glorious Borough Market which was the original goal to setting up the business nine years ago. Although we originally failed to get a stall there it provided the site for our most important project to date – the British Museum of Food – a new cultural institution for the country. 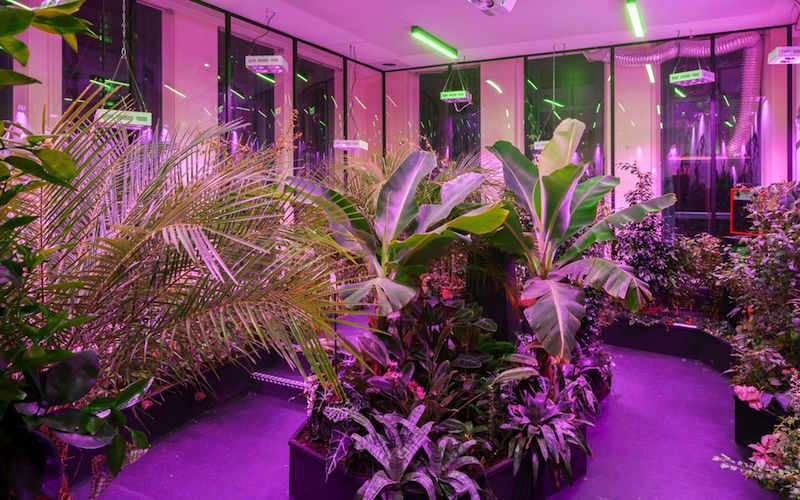 You started off as jelly-makers, how did you get into this and did you ever imagine you’d end up where you are now?

Harry  (business partner and fellow jelly enthusiast) and I are old friends from school. We met when we were 13 and in a terrible orchestra and decided to found the company as something to do on the weekend in 2007. At the time Harry was an architecture student and I was working for FTI consulting. Our combined interest in meat extravaganzas and dining in opulence led us to form Bompas & Parr as a means to realising creative projects and originally to make jelly.

Now the projects we work on can vary from creating alcohol-based art installations at museums such as the Stedelijk to cooking with lava and hosting large-scale performances like our NYE Fireworks show for London which was viewed by a live audience of a quarter of a million people. We never imagined we’d be where we are now. When we started out the studio consisted of just the two of us and was being run from our houses. My front room provided the kitchens and offices and were filled with industrial fridges. Harry’s place was the workshop and he had a vac-former at the end of his bed. It was pretty rock ‘n’ roll.

Now we have 20 staff and a 5000 sq ft studio that looks like a cross between the set from Barbarella and a Dior fashion show. There’s a organ (see I’m obsessed), The Flavour Conductor, in the meeting room that changes your perception of taste as it is played. The main studio space contains an extensive library, a load of 3m high crystal structures and an overgrown jungle that we were left with when finished the butterfly and bananas installation. 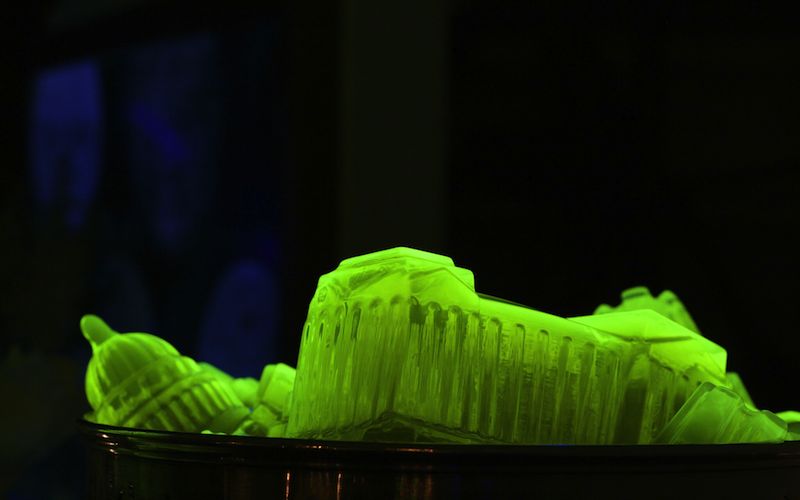 What do you get up to in your day to day life and what’s going on currently?

So right now we work to create experiences that enchant what’s on the end of people’s forks or in their glass. This could be working with a museum like the V&A and the Barbican or with brands like Stella Artois and Coca Cola. Ultimately we’re interested in giving you a compelling food-based experiences, one that matches up with the best meals you’ve had on the planet. Right now we are hosting a touring dinner for Stella Artois for 2000 people in NYC, Montreal and Buenos Aires in collaboration with The Roots. It is a pretty muscular dinner!

And right now? This interview is being written on a plane flight to New Zealand where I’m lecturing on trusting your gut instinct for Semi-Permanent (you have over one hundred million neurons in your digestive tract that is more than in the brain of a cat!), hosting an armpit sniffing dating event and making jellies in the form of their parliamentary building. I guess the main thrust of it all is to do creative work that makes people smile and have a riot while at it.

What’s been your favourite project to date and why?

Alcoholic Architecture our cocktail bar in Southwark where there was a walk-in cloud of breathable booze that intoxicated through the lungs and eyeballs. The bar was built on the site of an ancient monastery and we took this for inspiration. All the drinks were made by monks, Buckfast, Benedictine, Chartreuse; potent libations all. Though it’s now closed as the site is being developed it was the source of happy memories. There was an albino python that lived in the ladies loo, skull chalices, a flagellation station, medieval foam parties with mandrake infused foam, megalith carving and even armpit sniffing speed dating.

You get the gist, it was pretty savage. Creating arenas like this, in which you can enact the story of your amazing life is what gives me most pleasure. But not a patch on what we are devilling up with Les Enfants Terrible, Emma Brunjes Production and Creature for the Vaults in Waterloo right now: Dinner at the Twits.

What have you got lined up next?

Our next major project is Dinner at the Twits, a disturbingly grotesque dinner party where you are the imperiled guests of the two most disgusting hosts on the planet. Mr and Mrs Twit. For this show we are working to clusterbomb the audience out of their comfort zone, allowing them to break every food taboo imaginable. The dinner will be delicious of course but with the surrounding theatre will leave everyone laughing or vomiting!

The whole show is designed so that even if you go on a date with a rubbish person who has appalling chat, you will still have an awesome time. 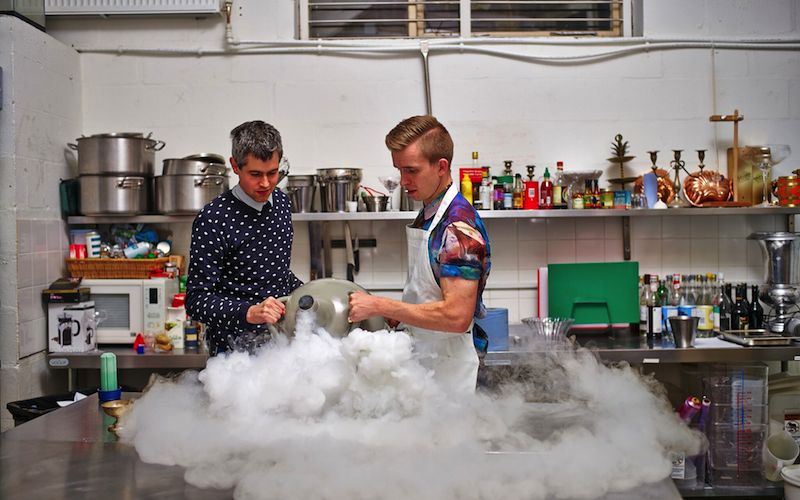 And finally tell us what your perfect day in London would be?

The ultimate day starts off with some rigorous bouldering at The Arch Climbing Wall at six am with my younger brother and girlfriend. It is a wonderfully physical way to begin the day and it also helps develop a powerful appetite all the better to eat five times a day, goring like an ogre.

Then to the studio nearby for an assault course of meetings with interesting folks, robotics designers, culinary historians, glass blowers and fruiterers. On the most productive days we embrace creative chaos putting together different industries to generate innovation. Our chef will make an ambitious lunch. One of my favourites was entirely inspired by an autumnal forest floor. The afternoon is spent on site visits – this could be venturing into the wet-sub basements of Selfridges, the Barbican’s secret jungle conservatory or The Soane Museum’s hermit cell.

In the evening I’ll go for cocktails at The Punch Room of The London EDITION; still my favourite place for elegant libations followed by a sensual and luxurious dinner at Parc Chinois. The interior is a total sensory assault. Inevitably the night closes at Shoreditch House, scene of some of our favourite revels including Wetness at Breakfast: Gourmet Bathing which featured a submerged banquet table and mermen mixologists.