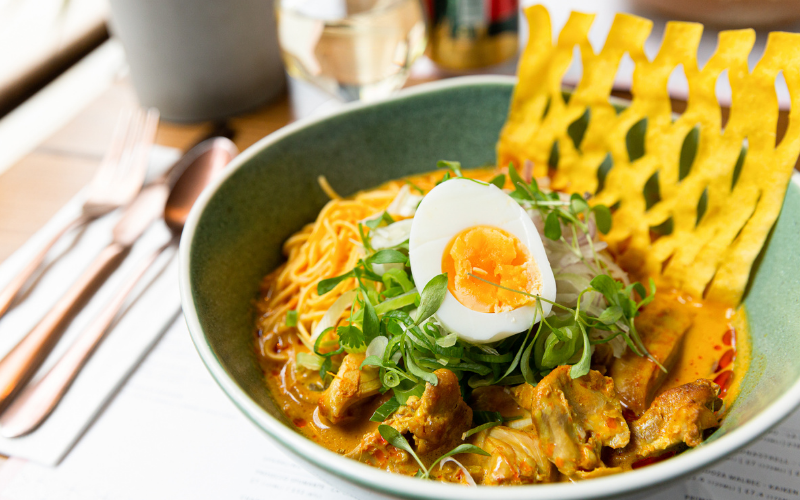 There aren’t many places to get Burmese food in London but that small list is about to get bigger as Lahpet is opening a second site in Covent Garden. Founders Dan Anton and Zaw Mahesh are taking over a unit in the The Yards (that’s the dining and shopping area around St Martin’s Courtyard and Mercer Walk, where the new look branch of Dishoom also lives). It’s going to be a pretty big spot too with 100 covers inside, a heated terrace seating 50 and another courtyard with room for 20.

The menu for the new Lahpet will feature all the faves from Shoreditch, including the namesake lahpet thohk tea leaf salad, coconut noodles with chicken, mohinga (catfish & lemongrass noodle chowder), and Shan tofu fritters. There’ll also be lots of new creations likes roasted pork belly & bamboo shoots; Rakhine fish noodle soup with squid & sea bream and a spicy & sour broth; Shan fish & rice with sea bream, jasmine rice, potato & tomato; and a range of regional pickles such as the choy sum, shallot & chilli Shan pickle. Two bars means plenty of drinks too, with the Lahpet margarita, turmeric & zuzu sour and kumquat spritz just some of the cocktails on offer. We’ve been eating at Lahpet since it was a pop-up in London Fields and we’re fans of the Shoreditch restaurant so we reckon the Covent Garden site will be another hit. And if yo want to get in there first, Lahpet is knocking 50% OFF food during the soft launch from 17th – 20th February.