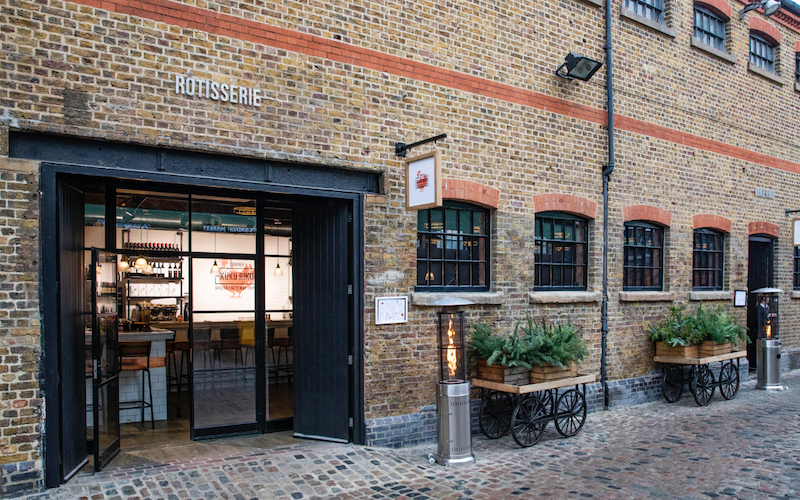 There’s lots of change happening at Camden Market, with quite a few departures and some new arrivals making this January busier than the Premier League transfer window. Following KERB, Voodoo Ray’s and The Flour Station have also shut up shop, but there’s a couple of new concepts in their place which sound promising.

Hot on the heels of The Camden Grocer, Nora & Nama, and Roadkill, the latest launch is rotisserie restaurant Kuku Riku. It’s where Voodoo Ray’s used to be and has also expanded into the next door premises which was previously an antique shop. There’s an open kitchen and a big Josper charcoal oven, which informs the direction of the menu.

Signature menu items include the 24 hour marinated rotisserie baby chicken; buttermilk chicken breast burger served in a brioche bun with garlic mayonnaise; and buttermilk marinated chicken wings, topped with either sriracha, honey or soy. Sides include smoked sea salt and thyme roasted hasselback potatoes; the ultimate mac and cheese (made with a mix of stilton, parmesan and Barber’s cheddar); and roasted winter squash with salsa verde.

LOUIE TO OPEN IN COVENT GARDEN (10)

THE BEST CYCLING CAFES IN LONDON (9)

ANDI OLIVER & FRED SIRIEIX TO POP-UP WITH ONE LOVE (7)