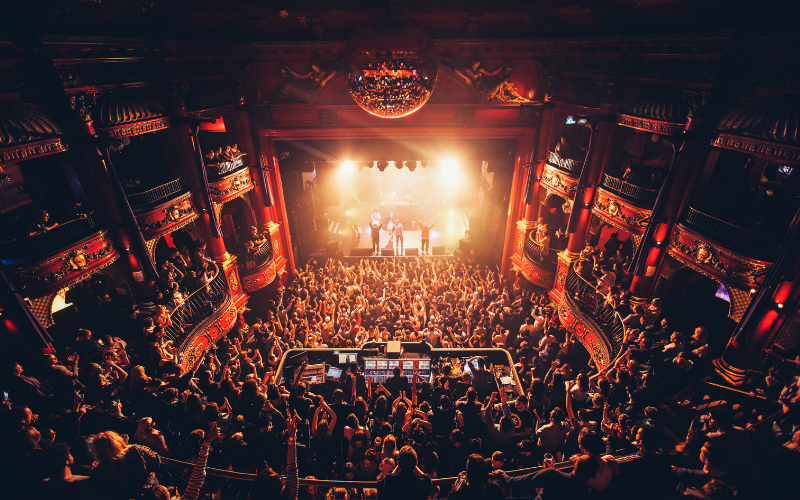 London’s iconic KOKO is reopening in Camden in spring after a three-year restoration. With a history that spans back 120 years, KOKO wasn’t going out that easy! It would be an understatement to say that the century-old venue is returning with a glossy new lick of paint. Following a £70m investment, KOKO is now host to a range of spaces including the original theatre, The Fly Tower venue, a new shop and a late-night pizzeria and tap bar. How many other venues can boast that acts like Charlie Chaplin, Prince, Amy Winehouse and Dua Lipa graced their stage? It’s only right that KOKO’s legacy should live on.

Cafe KOKO, opening on 27th April, will be an all-day affair, starting with a breakfast offering including Sicilian baked eggs, French toast and breakfast bowls. Pizza is at the centre of the day menu with the likes of ‘Downton Jimmy Brown’ (pepperoni, ‘Ndjua, mozzarella & San Marzano) and ‘The Higher Power’ (asparagus, courgettes, Calabrian chilli, vegan mozzarella & San Marzano) on there. For all you dessert fans, Cafe KOKO will also have a cheesecake selection, and the late-night tap bar will be pouring local craft beers, classic American cocktails and an Italian-influenced wine list.

You can now also become a member of KOKO giving you exclusive access to The House of KOKO backstage behind the original theatre, which boasts a new roof terrace and conservatory, dome cocktail bar, penthouse and recording studio, piano room, library, a hidden speakeasy, stage kitchen and vinyl room – pretty tidy if you ask us and it defo looks the part.

The new venue will also be pandemic ready with state of the art live-streaming facilities for those virtual concerts that we all love so much. They’ve certainly been busy at KOKO; not only will the venue be relaunching, they’re also be launching their own radio station and charity that hopes to give emerging artists a platform. Welcome back.