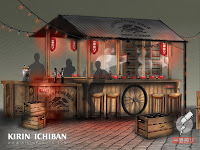 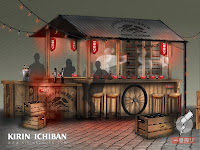 The restaurant will take the form of a traditional Japanese yatai, a small mobile food stall, which should be easy to spot in central London. The food is kushiage style – deep fried skewer delicacies – and comes from the head chefs at Yashin sushi and bar, so we predict that it’ll be amazing!

There are over ten combinations including pork with Japanese Worcester sauce, marinated lamb and miso, asparagus with sea salt and lemon and pickled tomato with tangy green pepper and lemon.

Possibly the most exciting thing about this venture though is the prices – £5 will buy you three skewers and a bottle of Kirin when you book online – Bargain!! Diners will also have the chance to see exclusive short films and vote for their favourite to win the Kirin First Cut prize which will be announced at the 55th BFI London Short Film Festival in October

The yatai opens on Wednesday 3rd August and operates midday – 11pm Wednesday to Saturday and midday – 9pm Sunday and Monday. Just make sure you book.