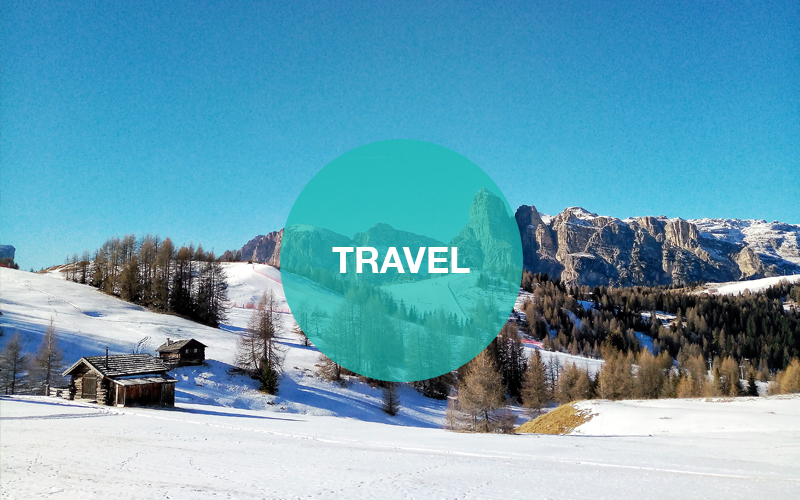 Italy has just about everything doesn’t it? A Mediterranean coast line, influential fashion houses, ancient ruins, art, sun, sea and oh the food…Mama Mia! We were invited to experience a different side to Italy and headed to the South Tyrol, Italy’s most northerly province, home to eighty 3,000m high peaks and one of the latest UNESCO World Heritage Sites – the Dolomites. Oh yes…it was time to ski.

The ski destination in South Tyrol is easily reached from Verona and Innsbruck and is a fusion of both Austrian and Italian (so you’ll find most will speak German) and this influence runs all the way through the design and architecture of the place. The two hour transfer from Verona Airport definitely sets the scene as the landscape starts to resemble that of a James Bond movie; alpine mountains topped with snow dotted amongst the valleys. There’s lights on in idilic cabins that have steam blowing out, the sky is blue, all the colours are rich and dense and the air just seems fresh and crystal clear. Yes this will do, we say as we inhale South Tyrol into our lungs.

Our base for the trip is Hotel Hubertus, they have 16 Alpine suites fresh from their refurb as well as a new restaurant. The hotel is also a wellness resort and has a jaw-dropping infinity pool suspended 40ft above the ground with a glass window that both entertains pool dwellers and those walking underneath. The Alpine suites are minimalist and contemporary in design and more than comfortable. A walk-in wardrobe for your ski gear, luggage and baggage and big enough for morning yoga. The bed faces the balcony with floor-to-ceiling windows and overlooks a breathtaking view of the town below that is in the shadow of the spectacular mountains. The open living space is like an Ikea showroom and if you can’t get comfy in there, try the free-standing bath that shares the same views. Speaking of the bathroom, it is huge with a walk-in shower and separate room for the toilet, all with the same great design.

Day one, skiing. Hands up who’s skied before? Well we haven’t so it was a lesson on the mountain mastering the ‘snow plough’. While we see people of all ages, shapes and sizes whizzing effortlessly at high speed down the mountain we feel a bit in awe of their ability to make this look far easier than it is. We just want to be free. We may only have had to pick up our skis just once from a miscommunication between brain and body, but any frustration is short lived given our surroundings. It’s a magical and calming place up in the Dolomites.

One of the main reasons for skiing on this particular trip was to experience ‘Sommelier on the Slopes‘ in Alta Badia…yes wine tasting whilst you ski from hut to hut, tasting and learning about some of the finest local wines of the region. A brilliant concept. Split into two groups, skiers and non-skiers (go group 2) we set off on a ‘winter walk’ that offered magnificent views and a different perspective of the mountains. We joined the skiers (pipe down group 1) and learned about two wines, where they were made and what to enjoy them with before tasting. Our sommelier, dressed in a white shirt and bow tie, then throws on his ski jacket, jumps onto his skis and poof, his fluorescent outfit becomes a tiny dot in the snow as he’s followed by his thirsty troops (including group 1).

Day two brought us to the slopes of Kronplatz, which was littered with black runs and inclines that made your stomach churn. More than happy to sit this one out we ventured to the top of the mountain via ski lift (yes it is comical that we were without skis) some 2,275 meters above sea level to visit MMM Corones, situated on the summit plateau of Kronplatz. Dedicated to mountaineering, the MMS has been influenced by Reinhold Messner the famous mountaineer, adventurer, explorer and author, and was created by Zaha Hadid. The building itself is incredible and sits on the edge of the mountain overlooking the Alps. Exploring inside is an expedition of its own, most interestingly we found a short film narrated by Messner that talked of some of his achievements, adventures and love of mountains. We learned he spent four weeks hiding in ice caves escaping avalanches…this guy has stories.

Food wise we were spoilt for choice. Hotel Hubertus catered for brekkie with a buffet and someone cooking up eggs, toasties and pancakes. It’s important to take in those calories for a full day’s skiing, even if you are in group 2. We ate in the hotel each evening and whilst some people might think that was missing out, the ever-changing menu was something we were glad to experience. Treated to five courses with matching wines the food was unbelievable. From monkfish to ravioli to pork to mussels to steak, every dish was faultless. On the slopes the food reached the same high standards and beat expectations hands down. Us Brits often have misconceptions about these things…you go to an attraction and more often than not have no choice but to eat in the canteen, which turns out to be tasteless, unhealthy, unappetising fast food. On the slopes the restaurants and shacks all knock up feasts that will have you talking about for days. Verona has more Michelin-starred restaurants than the whole of Italy, yes it seems the Italians (and Austrians) know what they are doing when it comes to food.

We’re already itching to go back; first time skiers or experienced snowboarders need to get South Tyrol on their radar, it’s easily reached and offers so much more than amazing winter sports. Find out more here.