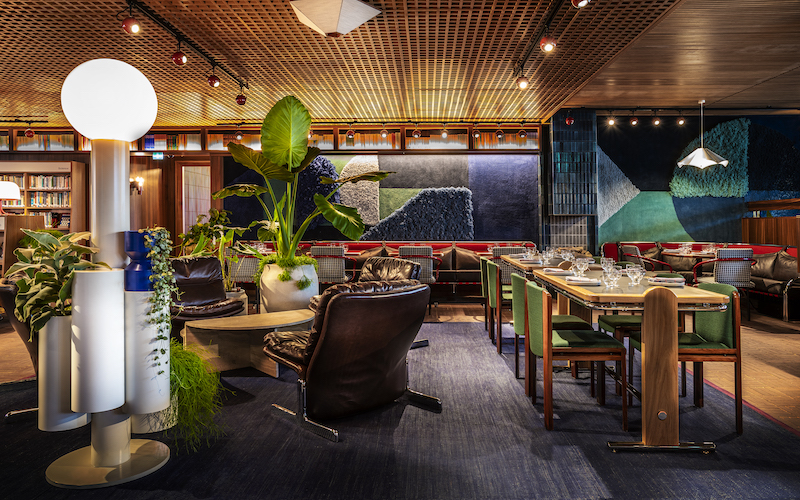 The Standard, London has finally opened in King’s Cross, adding to its portfolio of hotels in New York, Los Angeles, and Miami. The exciting news on the food front is that 2015 YBF Chef of the Year and former Pachamama head chef Adam Rawson has two projects here to check out – Peter Sanchez-Iglesias will be taking charge of a restaurant on the rooftop later this year

Double Standard is Adam’s bar, decked out with wooden doors, red carpet and white tiled flooring, it’s meant to feel like your local boozer albeit a little fancier. It was pretty busy with an after work Friday crowd when we popped our heads in recently but we were here to check out Isla so we left the drinkers to it to take a seat in the main dining area in the lobby.

Isla’s menu is divided into sections such as Land, Sea, and Soil and has quite a mix of influences on there: duck rillette sits next to padron peppers while burrata and pastas come between ceviche and beef tartare. It’s hard to know how to order a meal that’s going to make sense together but, that aside, the individual dishes are all on point.

We love the snack of rich, earthy ox ham from the snacks section and the crudité are made much more interesting by being pickled and served with a pea hummus. We then move to a panzanella salad, marinated tomatoes topped with crispy oil-soaked breadcrumbs and, one of our favourites of the night, a slab of broccoli covered in yoghurt, almonds and mustard. The Iberico pork chop is excellent, thinly sliced and served with an Argentinian chimichurri sauce that cuts through the meat nicely. Definitely order the potatoes with a smoked garlic miso to go alongside it.

Desserts are maybe a bit too clever, rather than satisfying, and we’re divided by the toasted amaranth tart with cacao nibs, which is nowhere near sweet enough for one us but hits the spot on the other side of the table. The miso fudge is excellent, although it’s more of a petit fours than a full-on dessert, making it a good option if you’ve already stuffed yourself silly. The next day we spot an incredible looking ‘Ice Cream Snickerdoodle’ on Instagram, which is on the menu at Double Standard, and kick ourselves for not moving there for dessert instead.

All in all, there’s some great food at Isla, but with a menu that slightly too eclectic at times. We’re looking forward to heading back to check out Double Standard, which includes Adam’s famous burgers – and that Snickerdoodle.