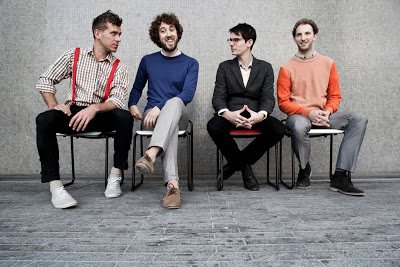 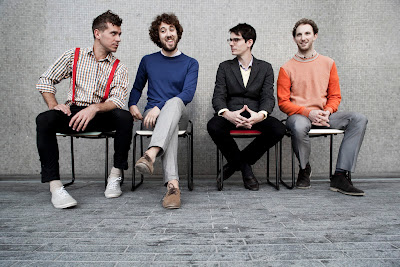 ‘I need something to break the monotony’ sings vocalist and bassist Paul Cousins giving a catchy hook to the uplifting and melodic track. We managed to get some time with Paul to talk music and the future!

US: Hi guys, how did you first get into playing in bands and how were Foreign Office born?

FO: We’d all been in bands previously before coming together to form Foreign Office. George and I (Paul) are from the same town, so when we moved to London a few years back we wanted to get a band together drawing on our influences. When we met Jim and Duncan it all fell in place.

US: What influences you when writing music and how does that process happen, is it a band effort or do you bring in separate ideas? Also what comes first the lyrics or music?

FO: We’re influenced by a lot of things – bands new and old, films, writers, people. At the moment our sound is about us playing in a room together bouncing ideas around. We’ll take an idea one of us has and develop it into a song. After that I’ll write lyrics and we’ll develop the tune further until it feels finished.

US: Your second single On Repeat is a catchy pop tune, how did that come about?

FO: We were listening to the Afrobeat influence in a lot of post-punk’s finest moments and wanted to evoke that spirit with this track without going too ‘World’. The lyrics are about the self-realisation that life is made up of patterns and repetition and so seemed to fit the circular nature of the music. We recorded the single with new production upstart Amir Amor, who has worked previously with Plan B and Wiley.

US: What does the future hold for Foreign Office?

FO: Imminently we have our single launch next Thursday 11th at The Luxe in Spitalfields Market, near Liverpool St. It’s free entry and we’ll be performing live along with Rocket No.9 and some superb dj’s. Longer term, we’re looking at recording our debut album next year and everything that entails. Exciting times!

US: What has been your favourite album from this year?

FO: Hot Chip’s album was great, as was Caribou’s ‘Swim’

US: As you boys live in Hackney, we’d like to know what you think of the local music scene, there is quite a lot of new and upcoming music venues for showcasing talent….have you been down to check out the local competition?

FO: There’s a good amount of bands in Hackney, but we mainly see them at our rehearsal studio on Kingsland Road rather than at gigs. There always seems to be venues popping up, which is positive because there is an equal amount of venues closing down!

US: Where do FO like to hang out in their free time?

FO: We’re more of a local pub than super-club kind of band. The Hare on Mare st. is a fine establishment

A fine establishment indeed! Check out the video for their current single ‘On Repeat’ below.