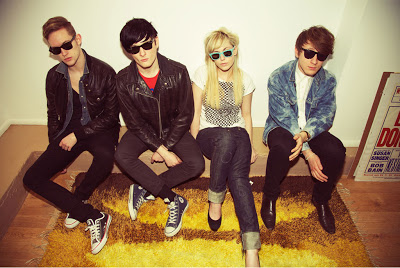 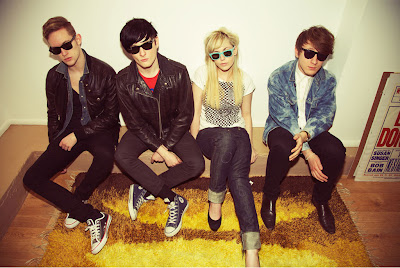 US: Your surf pop 50’s & 60’s inspired sound is very ‘now’ was this an intentional way to go or has this just been right place, right time?

JOHNNY: It’s just music that we love and connect with. its universal. timeless, so when trends come and go it always remains. and it’s just great.

US: I read somewhere that you said people don’t fall in love with bands any more and I think your right, how are Two Wounded Birds going to put that right?

JOHNNY: I think people can tune into if a band really means it or not, and I think having good songs is obviously key to that, we are nice people and true to boot. And I think people can fall in love with characters that they like, or if they see traits of themselves in others, its a nice way to feel connected and understood.

US: Your most high profile shows to date have been with The Drums, learnt anything?

JOHNNY: Ha! plenty. We tightened up a lot as a band after the first few shows.
You develop more of a freedom after a while where everything becomes easier and much better.

US: What music are you listening too at the moment and what bands have caught your eye recently at shows?

JOHNNY: Im listening to the songs of Spongebob Squarepants, i find the music on that show amazing. Other than that ive been listening to a lot of Elvis Presley lately and Cash’s San Quentin and Folsom Albums. We played a show with Cults about a month ago and i thought they were really good. They have really great songs.

US: You are planning an album this year, hows that going?

JOHNNY: Its pretty much been all written, hoping to go to LA to record it and hoping that somebody wants to put it out!

US: Where do you like to hangout when you come to London?

JOHNNY: I like the area around the Rough Trade East Record Store, lots of nice shops and places around there.