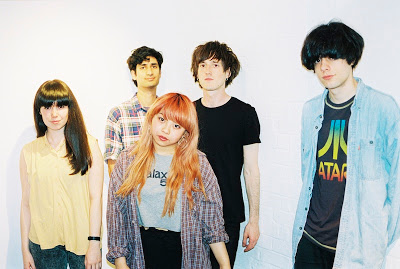 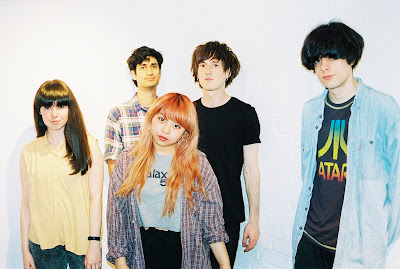 US: Tell us how you were born?

AHOAP: Steph and I started writing and recording songs together in our bedroom early last year. We started out doing it as a bit of fun, something creative to do together. We put them on the internet just so we could show our friends, not really knowing how to play them live or even having plans of doing so. Then people started to show interest. Steph had a bit of a freakout at the thought of ‘being in a band’ and performing as she’d not done it before. We decided to still give it a go and started looking for a complete line up. We started gigging in January this year.

US: What influences your music and where did that name come from?

AHOAP: I’m really into guitar experiments, just trying out every piece of equipment plugged into the next, seeing what that sounds like, then rearranging the chain and seeing what that sounds like until a discovery is made, appropriating that into pop songs is what drives me. Music-wise I was brought up on britpop and my dad was in a really good sort of noisy stoner rock band called Terminal Cheesecake, I guess the names run in the family.

Steph likes writing pop melodies, she ties everything together into songs and stops it being just 3 minutes of guitar noise by creating catchy vocal parts and has a good ear for placement of hooks and harmonies. This is probably down to her like of not just the expected influences, but also mainstream pop music.

US: Your debut single ‘Your So Cool’ is out 27th June, tell us about that track

AHOAP: People have asked if Steph wrote it about me, but it’s actually about her schoolfriend who knew the whole script of True Romance off by heart. It was the second song we wrote together and Steph wanted to capture the feeling of love and friendship that Clarence and Alabama had in the film. We filmed a video for it in this coastal town in Essex called Jaywick Sands. It was a resort built for holidaying Londoners in the 30s, but people started to move into the little wooden houses and now they’re being forced to move out so they can pretty much rebuild the whole thing.

US: You recently played the Camden Crawl, how was that, who else did you see?

AHOAP: We had three shows over the two days so it was pretty hectic, but a good weekend. The crowds there are pretty transient because everyone moves around to see all the bands they want, so there’s this weird fear as the previous band are packing down and you’re setting up that there’s going to be nobody around to watch you, but it turned out really well and all the shows were great fun. We didn’t get a lot of time to see anyone else, but we did catch Kong and S.C.U.M at the Underworld, both were great.

US:  The best places to hangout in London are…

AHOAP: We don’t go out as often as we should, but we always make sure to turn up to our friends’ nights The Sect and The Cave Club. Really great nights to let go and have fun. Eclectic spread of records, too.

US: What other bands in London do you follow?

AHOAP: We like S.C.U.M, Not Cool, Weird Dreams, Electricity In Our Homes, Paradise (which Steph is really into vocally) and our old friends Hatcham Social, who are putting a new record out soon that we’re looking forward to…

And there you have it, catch em live tonight and at other shows too soon.