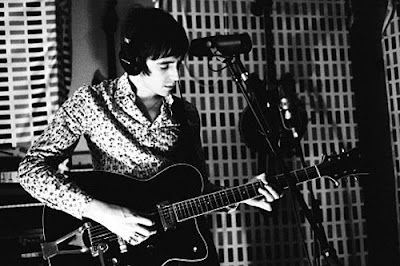 With two singles already released from the upcoming album, both of which were on show tonight bookending the set. Opener ‘Come Closer’ hits the ground running and is primed and ready to go. It had been a long day at the XFM all dayer after many of the cut out copy indie bands with occasional synth sprinkling failed to impress. Here at the finale Miles Kane fired track after track from his unreleased debut with only a minimal between track chat. Security were on hand at both sides of the stage as many fans were climbing over barriers to grab the frontman before leaping back into the crowd. Other tracks that stood out were the poptastic ‘Quicksand’ and the highly anticipated ‘My Fantasy’ which appears on the album with Noel Gallagher applying backing vocals, ‘Re-Arrange’ as well as the excellent riff heavy ‘Inhaler’ which got the biggest cheer of the night.

Throwing a unexpected cover into the mix was a faithful version of BMRCs banger ‘Spread Your Love’ which gave the floorboards of The Barfly a good ol’ fashioned hammering.

We caught up with Kane a few days after the Barfly gig:

US: Are you happy with the final finished album now that it’ all mixed and complete?

MILES: Yeah its perfect, it’s took a while on and off, the first track to record was with Gruff (Rhys) and Craig Silver called ‘Take The Night From Me’ and ‘The King Crawler’ and they are on the record. I then tried this other producer and we ended up doing the rest with Dan Carey and we’re finished now and it’s getting mastered tomorrow.

US: How have you found making a “Solo” record?

MILES: At first it was daunting, when I do “Puppets” I have a partner to bounce ideas off. We decided that I wouldn’t do any gigs or anything until this record was done, which is good but at the same time it kills you because you get eager to gig so it took a while to adjust. When I wrote ‘Come Closer’ originally that was a ‘glam rock’ heavy drum based track, it sounded good but not unique enough and it wasn’t till we got in the studio with the producer and we were listening to that ‘Plastic Ono Band’ album that gave us the idea to keep it dead simple and re-look at the drum beat by keeping it the same the whole way through. I’m just excited now talking about it.

US: Which bands/artists have you been listening to during the writing and recording of the new album?

MILES: Obviously I always mention Lennon so he’s always there as well as Lee Hazlewood, in fact when I was making this record and even before I really got into him, I’d known the records he made with Nancy Sinatra, then I got into his solo stuff about a year and a half ago especially that track ‘Rainbow Woman’. I did a cover of that for the B-side of ‘Inhaler’ I suppose that was a big influence and probably Motown as well with the drum beat.

US: Noel Gallagher sings backing vocals on ‘My Fantasy’ on the new album. How did they come about?

MILES: Yeah he did backing vocals, it’s only a subtle thing, I was going to add backing vocals on the chorus and bridge, I’d seen him a few weeks before and text him seeing what he was up to and said I was mixing and looking to add some harmonies and thought it would be great if he could “add the icing on the cake” and he said that “icing is what i do best” (laughs) and he just come down the next day and did it. I mean the press have made it something more than that but it was just a cool little nod.

US: Are there any new and current band’s that you like?

MILES: It’s a tough one really, Sound of Guns from Liverpool are a good bunch of lads, more rock and heavier than me but great, The Heartbreaks from Manchester are doing some good stuff that I like, I don’t really know many others, The Vaccines are really good that song ‘Post Break Up Sex’ is a good one, think it just charted didn’t it?

US: Before stepping forward to become the front man you were primarily known as a guitar player, who would you say are your influences guitar wise?

MILES: Duane Eddy, Link Wray, I just love that sound, really trebly echo sound, I’m not very technically good but I just find I can get good sounds, I’d be lost without my Bigsby though (Bigsby tremolo unit on the guitar) I just know instinctively how much pressure to put on it to stop it going way out, I suppose I just have good wrist action, my nights in are great (laughs).

US: Where do you like to hang out when you are in London?

MILES: Depends really, I go out with my manager and my mates for dinner here and there, The Groucho club in Soho is really good, I’m not a member but have gone there with people they have snooker tables there so you can have a few games and a drink, wherever really… I can’t believe I said The Groucho, me and Vic Reeves having a drink, oh look there’s Stephen Fry (laughs).

US: Will there be any new Last Shadow Puppets material or releases in the future?

Special thanks to The Social and Alex Fordham