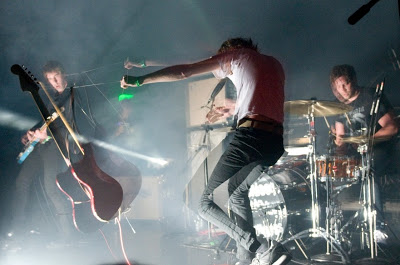 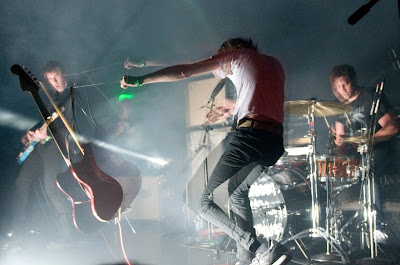 US: You’re famous for your Death by Audio pedals, any new inclusions on the horizon effect wise?

OLIVER: Definitely, we’re working on a lot of stuff doing a lot with spring reverb and we’re making these things that really overdrive the sound we’re gonna have multiple chambers with different springs all combined into one. We’re getting springs from a different manufacturer but it’s taking ages talking to people from Taiwan and China but that will definitely be the next pedal we’re coming out with but it totally sounds wicked and awesome! But we’re always working on tones of other stuff (Oliver is the main designer of the pedals, a couple of other guys help build them.)

US: You’ve undertaken some support acts with bands such as The Brian Jonestown Massacre, the Dandy Warhols, BRMC that all initially come from the San Francisco psychedelic scene, do you identify with that style of music – more retro than pop?

OLIVER: I love New York and the scene, but there is good bands all over the place and I just love good bands. Anton (TBJTM) is cool to hang out with, hopefully we will get to hang out with him again in Berlin.

US: Where do you hang out when you’re in London?

OLIVER: We always go out as much as we can while we’re here, shit I don’t know
I like going to new places….the Hawley Arms in Camden is good…shit I could be there now!

US: Volume plays a large part in your live set, is this something that is integral to your ‘sound’, or is it more of a fuck you to the crowd (i.e. try ignoring this!)

OLIVER: Both are really important, it definitely has to do with the sound though, this really cool thing happens when an amplifier is on the verge of exploding and you get a really cool sound, it makes things more unpredictable. Part of what is so cool about the sound is the speaker almost not being able to handle it. We’re looking for raw energy and chaos.

US: I’ve picked up some dance orientated drum rhythms in your music, does dance music influence you at all?

OLIVER: Totally! Definitely! Of course…though it’s probably not the same as dance music that people would relate to, but I love electronic music, we’re not trying to do anything in particular or stick to a particular genre or style we just go with what sounds cool.

US: You have a real DIY ethic to how a band operates, do you feel more bands would benefit from this given the state of the record industry and that music would bounce back in a more underground fashion by releasing their own material without the aid of a major label?

OLIVER: Sometimes you just have to do it by yourself but it depends on the situation you’re in if you know someone that’s really into the music and has a better vision of what you can achieve then you could definitely benefit with going with someone that could help you out, although for me when I’m in the studio they are always the people [label people] that end up fucking things up where you end up fighting with the engineers over recording techniques like “what happens if we crank this up”, even if these people are really cool one on one in that environment it causes problems…but maybe I’m just too picky I dunno (laughs).

OLIVER: Sure, Weekend are great, there is a tone of good bands out there at the moment.

US: What would you pick as your record/album/EP of the year?

OLIVER: The All The Saints record is great, I’m not sure if it came out yet but I got
a copy and that is fucking wicked. So if you can find it definitely get it.

US: Do you feel restricted by being a three-piece or does having limited instruments force spontaneity and creativity?

OLIVER: It can be restrictive but it can also help you because it gives you control of what we can do… you can almost do whatever you want to do at any given moment, I’m almost sometimes jealous of bands that are a two-piece, because when you’re just playing with a drummer you don’t have to play along with anyone else but playing with a three-piece is the next step. At any given moment you can take a song into any direction you want to. Playing with three makes it easier to change the dynamic of each song like if you want to go mellow, you don’t have to explain it to five people!

After the interview, ear plugged up and ready to go we grabbed a few crafty beers from the bands ample rider and found a good spot to watch the band in full force. They opened with “I Know I’ll See You” from their self titled debut and are already showing their hand and making it very clear to the crowd that they mean business with looping baselines, powerful drums and guitar.

Segueing straight into new album track “Heart In Head” which kicks in the fuzz and raises feedback ghosts from the Stooges LA.Blues and Fun House with 60s Spector drums anchoring everything tight. A flutter of delay from Oliver and we’re into fan favourite “To Fix The Gash In Your Head” along with this and the previously mentioned there are another two tracks from the debut tonight.

“In Your Heart’’ with rattling bass notes and garage rock chords gave APTBS their first chance to expand their playing giving drummer, Jay Space a chance to earn his stripes firing fills of machine gun snare.

Throughout the set tracks like “Missing You”, “Lived My Life” “Exploding Head”, “Ego Death” and “Ocean” showered the audience in waves of feedback and noise while keeping their own personal idiosyncrasies intact. A 60 minutes set showed no distraction from the manifesto of punishing noise they were dishing out, ending with a 1-2 combination audio punch of “Drill It Up” and “Deadbeat” which saw guitars being twirled into screaming feedback; you could almost feel the volume physically pushing the air, to the delight of the blessed out swaying audience.

The crowd was packed in tight to the stage and captivated by the band throughout. New York’s loudest only played one London show on this tour before flying off to Belgium and then heading to Berlin to meet up with The Brian Jonestown Massacre. Support came from by Dark Horses who felt a little like the cranky little brother to APTBS.

Thank you to the band and Zoe Miller from Mute Records