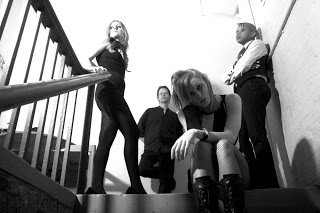 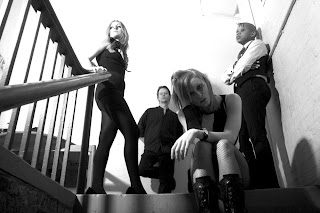 US: How did the band get started?

BETH: At the end of 2007 I left my previous band and I started to get to grips with using samplers and music software. I knew Debbie from her days in Curve and Kendra from her previous band Flame On and I knew I’d really like to work with both of them. Debbie was playing with Dean Garcia’s (Curve) band SPC-ECO and I went to see them a few times and eventually plucked up the courage to approach her about playing on some tracks I had written, she thankfully agreed to have a listen liked what she heard, so I took the tracks on my laptop to her flat and we did loads of recording in one afternoon.

I asked Kendra about playing but she was tied up, a few months later she came back and said she’d be up for playing so booked our first gig as an all-girl three-piece in May 2009.

Debbie ran into Alex, who she had played with years previously in Night Nurse, and he said that he was looking for a band so we got him down to practice and rest is a very noisy history!

US: What makes up your influences?

All: Kate Bush, Nine Inch Nails, Curve, PJ Harvey, The Jesus & Mary Chain, My Bloody Valentine, Garbage, The Fall
US: Your debut Ep ‘Confessions’ whats it all about
BETH: Most of the songs are the result from my frame of mind at certain times and drawn from experiences that I’ve had, occasionally with imagined elements to them.

US: Whats the best thing you have achieved so far ?

BETH: I love playing live, so a good gig always gives me a sense of fulfilment. Every time someone I don’t know comes up and talks to me about how good the gig was, really likes the band, is always very rewarding and encouraging.

KENDRA: Debbie Googe (MBV) really liked my playing style which was the best compliment ever and I’m still really chuffed about it!

US: When is world domination?