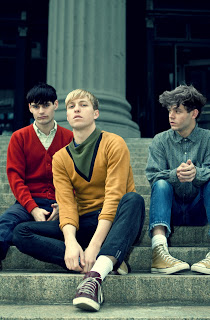 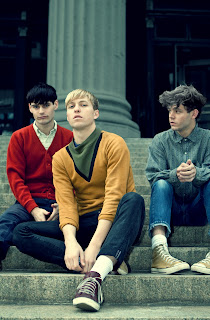 US: The last 12 months have been a whirlwind success for you
in the UK. You’ve gone from cult indie band to huge mainstream success. How do you feel having been thrown into the limelight and become stars so quickly?

Jonathan: That’s a tough question as we don’t really see ourselves as successful in that sense. The only difference we’ve noticed is in the size of the venues that we play.

Connor: We were playing venues like the Flowerpot and the Old Blue Last when we first came over and now were playing two nights at the forum which is great. We still like playing smaller pub gigs as well as all age’s shows so that as many people can see us as possible. We understand that it’s important to try and play in places where ticket prices are reasonable or even free, coming over once a year to play Reading and Leeds wouldn’t be fair to the fans as not everyone can afford a ticket.

US: Now you’re an international hit that must mean a lot of time on the road, what’s life like in the drums tour bus?

Jacob: Not as exciting as you might think! We don’t even try and beat the jetlag anymore we just tend to sleep then get up and sound check mid afternoon.

Jonathan: Travelling isn’t really such a big thing for us anymore

US: How is your new material coming along, what can we expect from the new album?

Connor: It Sucks! No not really, we have two songs complete already.Were trying to record in a similar style as the first record for continuity so expect something in a similar vein. We have a lot more freedom on this record which is nice as well.

US: What is the song writing process for you guys?

Connor: The first record was mainly Johns ideas brought to the rest of the band and we worked on them from there, its a system that works for us.

Jonathan: We try and write on our own where possible, we don’t have an ego problem in this band which is a good thing, we all switch instruments and ideas to get the best from the track.

US: Talk us through what happened with the departure of Adam? How have things changed for you?

Jacob: They haven’t really changed much to be honest; he wasn’t ever really terribly involved in the band, if anything he was in opposition of what we were aiming for so seem things have gotten easier.

Jonathan: It always seemed like a struggle pitching ideas to him, it would always be the three of us against him in terms of creative thinking.

Connor: Obviously the new record is something we’re all looking forward to, inevitably we’ll end up back on tour towards the end of the year.

Jonathan: Were going to take the first few months off though to spend some time at home, hopefully play a few shows around New York to demo new material without having to sleep on a tour bus afterwards.

US: Where do you as a band take your influences from?

Connor: We all have our own tastes, there’s something nice about the different sensibilities each member brings in but then there’s also certain music staples that we all draw from particularly The Zombies.

US: Do you get much chance to listen to new music? If so who are you listening to at the moment?

Jonathan: There’s an incredible band supporting us at the moment called Io Echo who were all crazy for at the moment – check them out they’re awesome.

US: What do you do when you in London? Anywhere specific you like to hang out?

Jacob: We like walking around London, especially Hyde Park. We don’t get much time off but when we do we check out museums.

Connor: In terms of shows we like playing around Camden, it’s got great energy. Also anywhere that sells doughnuts…..we love doughnuts, and cupcakes, we hear cupcakes are very big this year!

Indeed they are. The Drums are playing a free show on the13th December, we told you about it here.