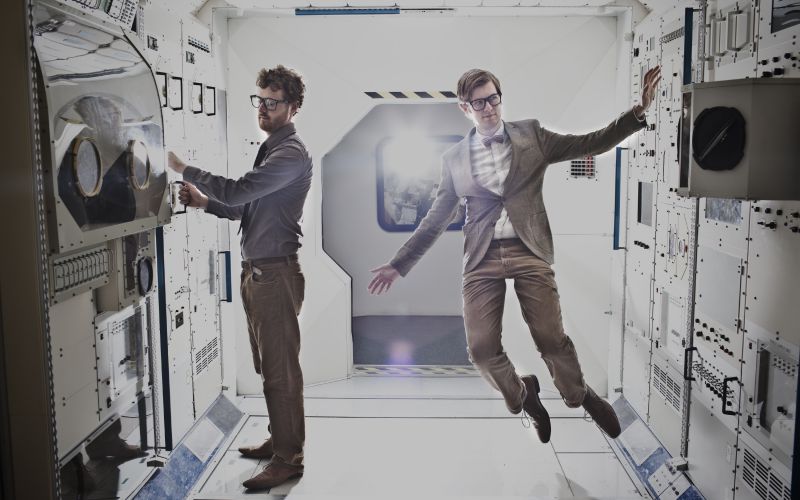 Public Service Broadcasting are one of those bands that just seem to keep getting better and better, continually pushing boundaries with albums filled to the brim with inventiveness. With the release of a live album taken from one of their ‘The Race for Space’ tour shows, we thought we’d pick the brains of the band. They are also due to play a special show in aid of Bowel Cancer UK at Islington Assembly Hall on 23rd November.

Where are you at the moment, and what are your plans for the day?

I’m at home in my kitchen, shivering – the heating and hot water are on the blink and it’s cold. Pity the struggling artist… Later I’m going to go and re-record the entirety of a demo for a song on the next record as I’ve totally rewritten it because it wasn’t good enough. It’ll probably never be good enough, mind you!

The Race For Space had a space theme (obviously). What made you pick this over anything else?

Any number of reasons. Pragmatic ones, like knowing that the footage and audio existed and that we could use some of it; imaginative reasons, thinking about how inspiring it’d be to write about some of mankind’s finest achievements; romantic reasons, wanting to push back against some of the lazy cynicism surrounding the Apollo program in particular.

You’ve always taken such an experimental approach to your music, what would you say first inspired you to do this?

I’m not sure we’re that experimental, really – we focus a lot on melody, which is what gives us some of our appeal I’d say – but we are a band born of necessity. If you can’t sing, but you can play a bit of guitar and do a bit of programming and are absolutely in love with music and making music, what are you going to do? I’m a big fan of Test cricket and I remember when Alistair Cook was struggling for form, someone saying ‘he’ll find a way to make runs’. I think we’re the same. We’ve dug it out, somehow, against the odds. We’re not the most talented or original band, but we’ve found a way to make it work and to give people something they really seem to enjoy.

Coming soon you’ve got also live album from the Race For Space tour, what made you take that leap, and what was special about the show you recorded?

I’m really sceptical of live albums in general, especially ones by relatively new bands, so I initially turned down, flat, the idea of releasing Brixton. I felt it was a bit too early for us and a bit presumptive. But then a bit of time passed and I realised, from some of the lovely messages I received (and there really were loads of them) and from watching back some of the video that something really good did take place that night and it was worth releasing for our fans, who were asking for it. It was the realisation of an ambition – well, more of a hopeless dream than an ambition – and the people who were there or who watched it online really seemed to buy into it. It felt like a celebration, for a band to come from nowhere, no label, no advertising as such, everything DIY, sending out records from my front room in 2012 and playing to 30 people (if we were lucky) to selling out Brixton 3 years later… It’s really extraordinary and is, I think perhaps immodestly, worth documenting.

What have you been listening to?

At this stage in the writing process I’m sorry to say it’s mostly the demos I’ve been making – working out why they’re terrible and how they can be made to be marginally less terrible. As soon as the album is finished, that’s it, I won’t listen any more, but for the moment they’re getting a lot of plays and a lot of scrutiny. But besides that, I’ve been listening to The Invisible’s latest album (especially Memories), a bit of Bon Iver (still undecided), some vintage Kate Bush, some later-period Manics, some quite electronic stuff like The Analog Roland Orchestra, a lot of calypso (as ever)… oh and some Beethoven. I’m slowly working my way through his symphonies so that I’m not quite such a musical ignoramus.