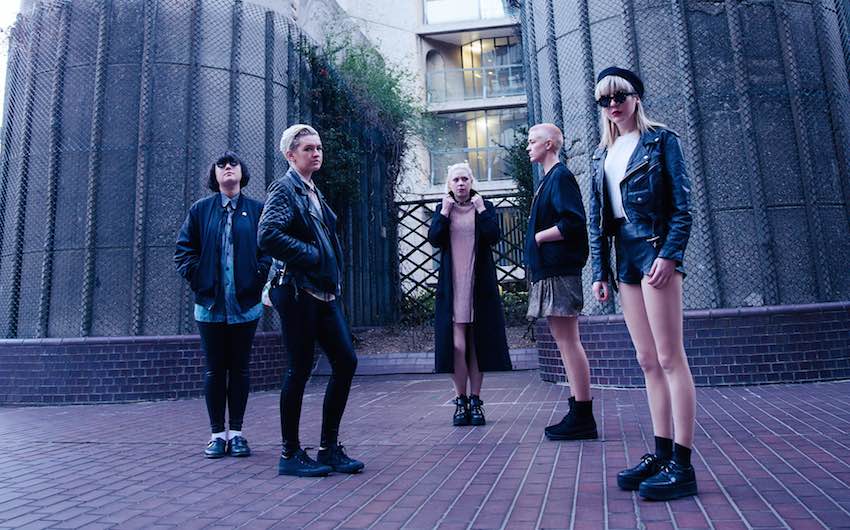 Our fave five-piece girl band PINS is back in our lives again with a new single, as well as an upcoming EP and a UK tour on the cards over the next two months. We caught up with Faith to find out how they scored a collab with Iggy pop and what happens when you lock yourselves away in the Scottish wilderness.

Manchester, at our rehearsal room. We travel far and wide and still end up back at our tiny carpet-walled rehearsal room with a knackered ceiling; it’s where the magic happens. We’ve been making demos in between jamming along to next door’s intermittent outbursts of heavy metal.

Iggy Pop features on ‘Aggrophobe’, how did that collaboration come about?

The song was always written with a male vocal in mind, my husband Mark wrote the lyrics to that song and he laid them down on the original demo, you can’t shake that. We rented a house in the Scottish borders for a couple of weeks in September, set up a makeshift studio and recorded some songs, one of them was ‘Aggrophobe’. We’re all Iggy fans anyway, we saw him play earlier last year year at SXSW, it was incredible. We knew his voice would be perfect for our song, in a way it seemed ludicrous to ask a rockstar like Iggy Pop to perform on our track but in another way it’s just a human asking a human, if he’s into it then why not? I think a lot of musicians, pop stars, rocks stars, superstars or whatever put themselves on a pedestal, make themselves out of reach, but Iggy Pop said yes to this; he is rock and roll.

Your new EP Bad Things was recorded in the Scottish wilderness, what effect did that have on the finished record?

We could draw parallels between the isolation of the wilderness and the sonic isolation but I’m not so sure I believe that. If anything I think it has that itching feeling you get when you’re trapped. We were in close quarters with each other working on something that is so precious to us, there was frustration and stress, I felt removed. It’s hard to explain but we came out the other side happy as Larry with the best record we have done to date.

What is life like on the road for Pins?

Touring is a blast but it’s not for the faint hearted…late nights, early morning, pulling gear in and out of venues, pissy backstage rooms, endless available booze and long drives. On the whole though, we take care of ourselves/each other. We wash our clothes at every available opportunity, we drink a lot of water and we seek out the best vegan food in whatever city we are playing. The most stupid time we had was in the USA, it felt like we were either playing or driving, there was no time to sleep. Once we played a show somewhere in California then drove afterward for like 4 hours to somewhere in Oregon and stayed at an Airbnb where myself Lois and Kyoko were sharing a double bed. It was like 5am and we couldn’t sleep cos we were laughing at how we had set out alarms for ONE HOUR, then we had to get up and set off again to make it in time to play a radio session. We just cover our eye bags with glitter.

What music are you currently listening to?