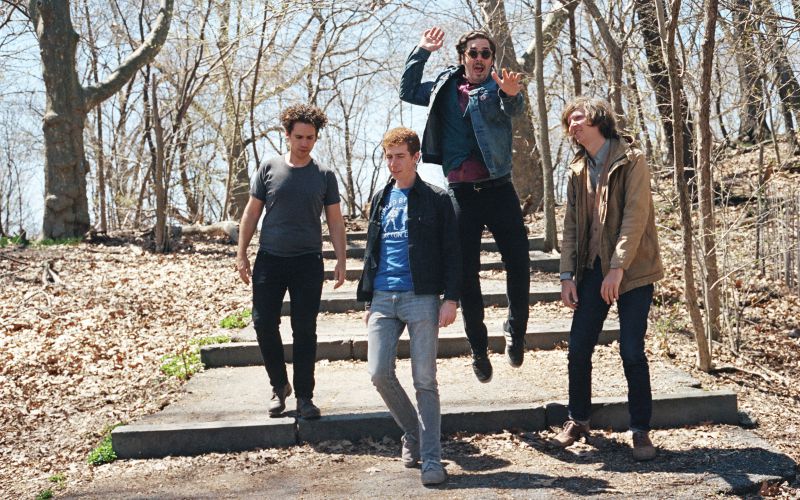 Parquet Courts have continually proven themselves to be on of the most exciting bands to have come about over the past few years – their intricate and intelligent contrasting with the playful attitude to make consistently stellar records. We spoke to Sean from the band before they hit the UK in October on their tour with Eagulls…

Where are you right now, and what are your plans for the day?

I’m seated on a metal chair in the narrow alley/patio in front of my apartment, rejoicing in a less-than hot 1/8th of a mug of coffee, being serenaded by my dog, as she barks at the following people in order: business person using alley as a shortcut to the subway, frankly annoying people trying to be covert about capturing a rarer Pokémon that resides in the alley, and heroin junkies doing heroin in the alley. Today I’m working on a new song and some classic chores (dishes, finding that which is missing, organizing, et al.) before I pick my wife and kids up at work and daycare respectively..

How would you say your most recent album differs to your previous work?

I know there’s an answer to this question but gimme a second. *listens to entire discography, strokes chin* Oh yeah, the songs aren’t the same! No but seriously, we put way more time into it (a year) and had access to many more resources than ever before. As far as process goes, we’ve never done anything like it before and the entire experience was extremely rewarding.

Human Performance had an incredible (if a bit disturbing) music video – how did that all come about?

A friend of ours in Germany is a visual artist named Phil Collins. Andrew keeps in pretty close touch with him, being a visual artist himself and something about the song resonated with him in a decidedly puppet-centric way. It’s rare you get to know someone who has puppet thoughts, as well as puppet access or the supplies and capacity to create puppets so it seemed like kind of a no brainer to enlist Phil and his talents to make the video.

You’ve played a lot of festivals this summer and have a busy tour schedule coming up, how do you like to relax in-between shows?

Ah, to relax! I like to binge watch television and order different styles of takeout food at the same time, thus organizing a kind of foot race to see who’ll get me their fare fastest. Typically I’m dressed in an outfit I refer to myself in as “Telluride Man,” which consists of tight leggings, a thick woolen cardigan over my bare chest, and a homemade necklace with an embroidered leather pouch dangling from it. One or two small items fit into the pouch but usually it’s empty.