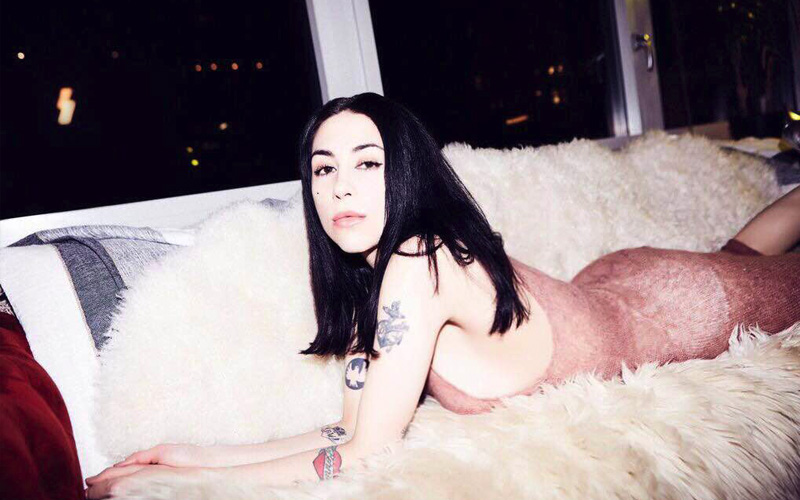 Was going solo always something you wanted to do?

Well the whole going solo thing is not quite black and white, as DDG was housed in a very clear band form. In terms of writing and recording it wasn’t that different. When I started working on this record it was for the 4th DGG’s record but in my head I had felt like I had hit a ceiling with what I could do with DDG’s. It’s kind of a weird thing to realise that a certain point that whatever it is that you’re doing doesn’t fit what you’re doing…at least conceptually. Which is ridiculous…The Kristin Kontrol thing came very last minute. I had finished the record, we were mastering it and we didn’t know the META-Data to give the mastering studio. There were a lot of things that seemed like if this were to come out as a DDG’s album, so much of the infrastructure would have changed. That to me didn’t makes sense. It’s not going to be DDG’s anymore if this came out, so why disassemble this significant thing that we’ve all worked up over the last 9 years building when to me it would be better to leave that as it is and not take away from any of its significance and start something fresh.

We read that when you first started writing for this album you said it initially went badly, how did you keep motivated and push through to make it work?

Yeah there was a lot of really bad…I am looking forward to putting out a box set of all the rejected songs! (jokes). I was definitely going to do something really different, I decided not to write on guitar, so I wrote on piano and wrote a lot of weird songs I thought were interesting. So this was not coming the same way, I was trying something new and there was obviously going to be some stumbling blocks. Forty two songs in, it was still not there and I remember there was some other things going on in my personal life and I just had a melt down…then the criticism came back more constructive and looking back now it all makes sense and eventually I moved my studio into a friends apartment and the change of scenery and brought the guitar with me and ended up writing the first song that made the record.

X-Communicate is the first track from you as Kristin Kontrol, what is it about and was this the turning point when writing the album or was this something you had for a while?

No, that song came later. The first song that I wrote that was the turning point, is the ninth song called ‘Going to the motions’. I did pronominally write that on the piano but I had my guitar with me so I was working out the progression and went back to my comfort zone. I went to and saw a Perfume Genius show, which made me feel so inspired and moved. In order to make this change I definitely need to bring the guitar back in, using it more like tool during songwriting and then I pull it out of the demo and arrange it differently. And then it went down to making the decision of who was going to produce it. I want that balance of somebody that knows every single thing about synthesizers and I need somebody that loves Rita Marley and Drake, a huge spectrum. Cause I now want to expand whatever influences I show subtly to be everything, not just these more niche classic indie rock.

How will KK work live, are you having a full band or keeping it minimalist on stage?

‘Show Me’ your new single premiered yesterday and it feels completely different to X-Comunicate, was this a conscious decision to show what your new direction is all about?

Well yeah, something that I love about this record is that it’s very song to song, I know I have never made a record that varied that much stylistically and instrumentation and in the past it was what ties all these songs together. With this song it’s much more that I want my voice to be the unifying thing and the songs can do whatever. ‘Show Me’ was what I thought what the lead single should be, it was an early favourite of Sub Pop and for most people that I would play the occasional song for and really liked, I really liked it. Because I was trying to write a very simple, direct song and I felt like I accomplished that. The whole record is pretty personal, this song in particular is probably the most overly positive song that I have ever written, that felt good.

So why did you decide to put a stop to DDG’s or is it just on pause?

I haven’t thought about it other than I can’t do both. Again I don’t have any interest in, at least right now, in writing things that are for this and not that… For me this is the all consuming thing I am doing right now and it’s the thing, the vehicle I can move forward in freely. But than again I will miss playing the guitar and singing with girls. Who knows?

It’s the beginning point, it’s kind of difficult when you put out a record in late spring, early summer because that’s festival season and that shit has been booked for a year. So, we’re going to have to see how it all plans out, but we’ll probably end up touring the most in the next year. Just because how that stuff works out and how far in advance you have to book things. I like to stay busy and I have been the most dormant. I have ever been in my life and I reached the point where I thought, I have to get a job, not just for money but for mental health. There is only so much yoga and chors and DJ’ing you can do and not feel like a sloth. I am hoping to stay super busy but I am not sure how it will look just yet.

What are some of your favourite places or things to do in London when you are here?

That’s a funny thing, it’s very different from when I am on tour or when I am here and not playing shows. I have for many years now, probably the last 10 years I’ve been coming to London, stayed with my friend Holly Cook, who’s a singer. I used to stay either with her parents in Shepherd’s Bush or near East Acton, now she lives really close to her parents in a really nice flat that her dad actually grew up in so it’s very comfortable place but really far from where any friends I might have. They are all in Dalson or beyond. I usually am, if I am not playing a show and therefore in those areas I stay west and I do funny things like go to the Westfield mall. Just cause. I go to Paul Cooks pub with him which is a local pub, to have some beers.

What music are you currently listening too?