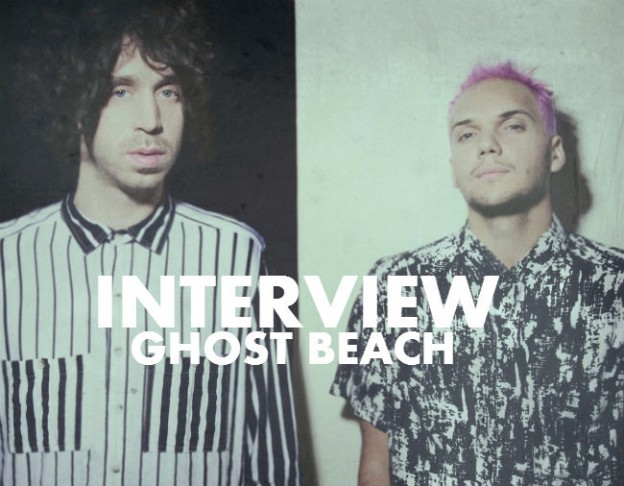 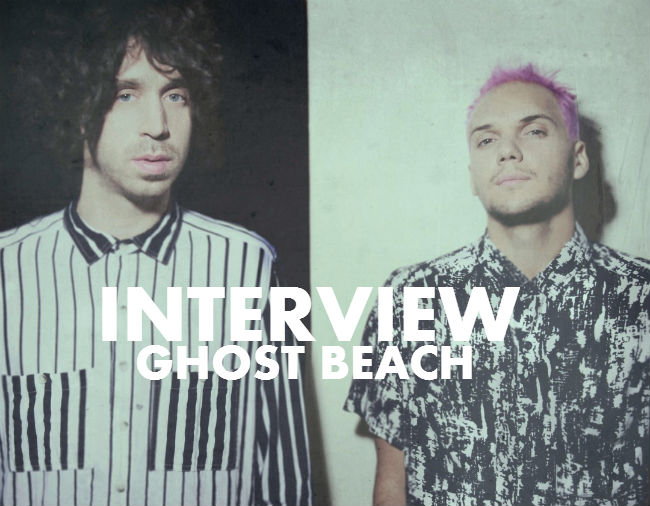 “We’ve been saying forever that it would be so cool to get to play that side of the world one day,” says one-half of the duo, Josh Ocean (vocals, bass, synths). “We’re super excited to be in the UK. We’ve just been looking forward to getting on the road and just starting the whole album cycle because it feels like we’ve been sitting at home not doing anything after we put so much work into this album. It’s turned out much better than we ever could have hoped and, even though there are a few older songs on there, the whole thing sounds very cohesive and relevant. Like, Empty Street is about three years old, Too Young is actually even older, but most of the songs are about one year old.”

And loads of infectious, ‘80s-inspired synth pop melodies is what we can expect to find on ‘Blonde’. A fitting introduction to their musical influences as well as their own talents, Ghost Beach prove that they are definitely the band to keep an eye on in 2014. Hype Machine and the global blogosphere have been quick to catch on to the Brooklyn pair ever since they released Empty Street back in 2011, and now London and the rest of the UK is finally catching on too.

“That was an important track for us because it was the first song to put us on the map,” explains Eric ‘Doc’ Mendelsohn[guitar, synths, MPC samples. “We get comparisons with MGMT and M83 because people hear some of the vintage synth that we use and it reminds them of those bands. I guess it’s awesome because they’ve both made phenomenal music which we respect and, as much as we’re trying to be unique and ourselves, to get comparisons to such great artists means that we’re also doing something pretty good.” According to Ocean, however, Ghost Beach isn’t necessarily influenced by them. “We always go back to the ‘80s in general because the calibre of pop songwriting in that era was so exciting and amazing. It was an adventurous new frontier in music production and the emerging technologies that shaped the sound then and now. Specific artists that we always go back to are The Police, Tears For Fears, The Eurythmics and Talking Heads.”

And ‘technology’ is the key word when it comes to Ghost Beach. Determined to remain a duo at their core, Ocean and Mendelsohn insist that in this day and age a full-blown band of three or four people is just no longer as necessary as it once may have been. Relying on their trusty Ableton and Mendelsohn’s knack for production and various other gadgetry, Ocean says it’s now possible to interact with computers in the same way as human beings.

“We’ll definitely never add anyone else, two people is enough for us. We do have a team of people that we work with on different things occasionally, like trying to get a certain synth sound that we can’t work out or whatever. We sometimes work with a friend when we’re trying to get more intense with the programming side of things. We also have a live drummer that always plays with us. The reason we’re mainly a duo is because we use a lot of computers and a program called Ableton, so I honestly feel we actually have tonnes of advantages over other people in that regard. Technology is at a place now where computers can interact with people and you can play with them as you would with band members. It’s exciting that we don’t feel limited by our ability to play with a computer and what we’re able to do with it is ever-increasing and more and more cool. The way that people experience music right now is changing rapidly anyway and we are all for that.”

Which is why Ocean and Mendelsohn jumped at the chance to spark a public debate about the pros and cons of new technology in relation to the music industry. After being given the opportunity to advertise Ghost Beach on a Times Square billboard in New York, the pair decided not to fill the space with just a simple and predictable band logo, but instead, to inspire an intelligent conversation about music piracy in the 21st century. And although they received some negative feedback, overwhelmingly, the response was positive.

“We got this amazing opportunity and we wanted to use it for something a little more important than just putting up a band logo,” Ocean says. “We wanted something that would start a conversation, a debate, something that mattered. We got a billboard outside of Times Square which is a place in New York that attract a lot of tourists and people in general. And, you know, we’re a band, we’re musicians in the 21st century, and this is an issue that we deal with – piracy and downloading. So we teamed up with a company to help us see what people thought about this issue and the idea went viral. A lot of people thought it was a really cool idea and some people thought it was this whole conspiracy where we were turning our backs on struggling artists and advocating piracy. We just wanted to do something thought-provoking with the space we were given and, ultimately, we’re actually not for piracy or downloading anybody’s intellectual property illegally. However, we do support using new technology and new platforms and pushing innovation further to help spread people’s art. Spotify is gaining a lot of attention in the US which I think is cool because it lets people experience music at a different level now. As an indie band on Spotify we’ve had some minor success but it’s great for a young indie band if people are listening to your stuff. If they want to help you to put up a link to your merchandise, that’s even better.”

‘Blonde’ is out 24th March through Nettwerk