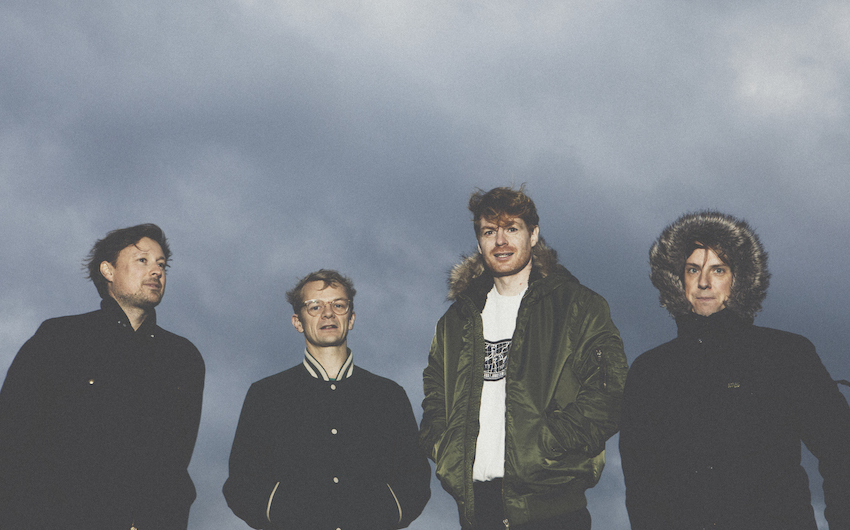 I’m currently sat on our tour bus which is driving from Paris to Edinburgh via ferry from Dunkirk. We played a show for Les In Rocks last night which was good fun as always in Paris and then had an after party with our label. Today has been a bit more relaxed, we had a radio session in a brewery somewhere in Paris, obviously we had to have a few drinks. I mean, a brewery!

Why did you choose the good old British seaside as the setting for the video for your new single ‘Tic Tac Toe’?

Good fish and chips, and junk shops. That and it was the closest place to London that John MacLean (Dave’s brother) could find that had a ghost train. The whole video is kinda centred round Vinny ending up on a ghost train which is filled with references to classic horror films ending with a weird frantic/psychedelic Django Django playing tic tac toe. We spent the day there sheltering from the English Channel wind and eating chips. John did the whole video scene by scene on the day. It was nice to see the whole thing shot start to finish as we usually dip in and out as and when we are needed on video shoots.

Your new album Marble Skies arrives early next year, how have things changed for the band since your last album came out?

We’re all having to juggle life and Django a lot more now. I think creatively we’ve been more playful on this record too. We have our own studio in Tottenham now and have piled all our gear in there and with no studio time countdown hanging over us we’ve been able to relax a lot more and enjoy writing more. I think the second record was a pretty full on experience for us. Coming out of the first album’s success and touring we jumped straight into recording/writing and we maybe didn’t have as much head space as we have had whilst writing this record. So yeah, I guess a lot has changed but we’re still excited by making music.

You’re heading out on tour in the spring, with a London date at The Printworks – it’s quite the venue, so have you got something special planned for the show?

Yeah, we’re working at the moment with some folk we know on the live visual side of next years tour. It feels really exciting getting everything in place. We’re in the studio as much as we can overhauling the set too. Yeah, the venue is totally amazing so we’ll be bouncing ideas around over xmas as to what we can do. We’ll hopefully have some friends on stage with us, either way it’ll have to be a big night. I like the idea of Tommy abseiling down to his synths or Vinny floating over the crowd, we’ll have to wait and see though.

Django Django release their new album Marble Skies on Because Music on 26th January 2018. Their UK tour is on sale now, including London’s Printworks on Friday 23rd March – tickets are available now at djangodjango.co.uk