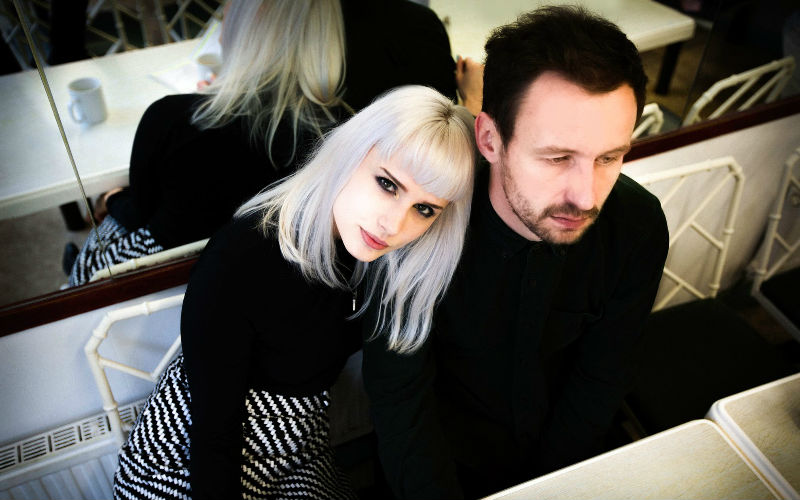 What have you guys been up to today?

John: Staring into space, and space has been staring back…it looks disappointed. I have been working the day job, answering band questionnaires. Eating foods. Existing.

Beck: I’ve been driving a big white van around London, picking up some amazing vintage furniture, which I want to keep for my new flat, but sadly I cant, maybe I will pinch some another time.

We’re digging your new track ‘Stormy‘…whats all this thunder in your eyes about?

John: I’m glad you like it. We feel it’s the proper bridge track between the last album and this one. It was mainly written when I was trying out a fuzz pedal that St. Vincent recommended when we were on tour.

Beck: It’s about that look you get when you meet someone and can’t work them out. ‘You see nothing but thunder in my stormy eyes.’ The mystery and wonder, what the night might have installed for you.

We first wrote about you back in 2012 when you released ‘Cast a Shadow’, how does life back then compare to now?

John: We are living in the londons now…everything is faster…there are only amazing days and terrible days. We miss our old studio squat but times were changing. Releasing a second album is a lot more heavy than releasing the first…the first we were just excited by everything that was happening…the fact that someone wanted to put out this thing we had made for fun…the fact that someone wanted to write about it or play it on the radio…with the second album you are expecting these things to happen so it comes with fear that no one will care and it will be what kills you. Constantly questoining everything. And you have to constantly remind yourself that everything is relative to your mood…on a good day I am bouncing around thinking that we have made an incredible record that will exceed everyone’s expectations…on a bad day I have got lost somewhere along the way and made a mess.

Beck: Life is much busier now, which is always a lot more fun. Always looking forward never back… It’s good times. I miss castle greyskull as you could do what you wanted in the studio, it was a messy place, where you could smoke and drink and at the end of the night just leave and not tidy up. Now our new studio is in Johns new house, where you can still have your red wine, but I do panic a little as he has cream carpets and everyone knows what I’m like with red wine. I spilt some red wine on Bones (drummer) from ‘Lusts’ white t-shirt at a gig the other week, I’m going to say that he was very impressed with my spilling skills and the t-shirt looked much better with the stain.

The new album is planned for March, what can we expect?

John: Coves x Coves. My head has been in these songs for the past year, I have no perspective but there is an air of magic around it…its bigger and faster and it’s like a soundtrack for existing in this retched city. There has been a lot more collaboration…I have always been a complete control freak with music, with this album I have opened up and let a producer in and let other musicians play on it…I think that is definitely to its benefit.

Beck: Johns said it all, I’m very excited about this album. I feel like this time this album is us now. The last album ‘Soft Friday’ was written a year before we got signed and it was released. Also it was the first time I had ever written anything so it was all new for me. This time I knew what to expect for what I/we wanted, we knew a lot more of what we wanted for this album to sound and feel like.

John: I’ve been listening to loads of radio…one of our managers introduced me to the tunein radio app, you can visit any country in the world and listen to what they are listening to…it’s like an instant micro holiday for the brain…we were asked to DJ at an event at Tate Modern called World Goes Pop and it was about the pop explosion in the late sixties and how it affected the world.I spent a lot of time researching music from all over the world from that period and found some amazing stuff…especially south America…those people really knew how to make crazy psychedelic fuzz mentalness…but if it’s new songs you want…and there is a lot of awesome stuff out.