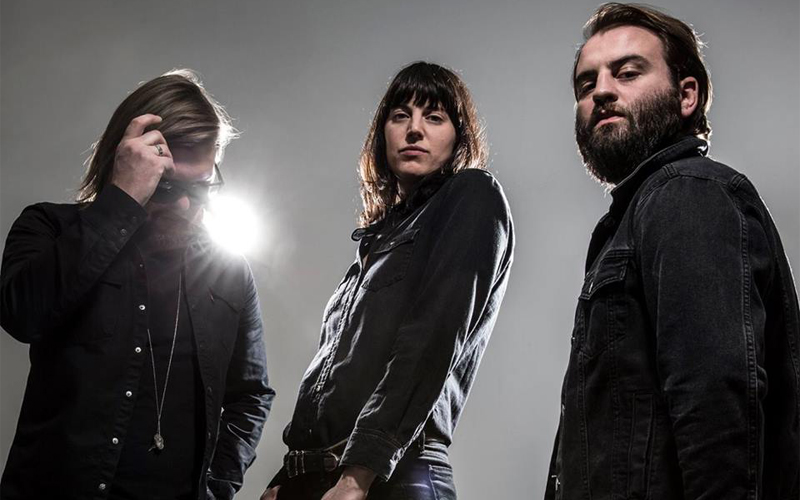 We got a taste of you new tracks at the studio you rehearsed at in South Bermondsey, how did you find that?

EMMA: It was great, good to play for other people rather than just to ourselves.

RUSSELL: It was natural, because we were rehearsing in a room and we just turned around and people arrived. It actually felt quite exposed because we were in there just hanging out and then a natural audience was there. It was good, we played the next couple of nights as well.

It was quite intimate…have you done something like this before or would you do it again?

EMMA: We’ve played to label showcases, it was a nice way to play for people who are gonna work on your record before a proper gig, more intimate and personal.

You wrote the album in a Church and we read the Vicar brought you tea and biscuits on a trolley…did they make it on the album? What was the writing experience like?

RUSSELL: Two churches, two Vicar, two bosses. It was amazing. Because we were absolutely on our own, nobody goes into a church in the middle of the day. We got stopped on Sundays, there was a poling station, a local election. There were two funerals, one gypsy funeral with horses and plumes, and every other day of the week we got it to ourselves, it was like this for about a year. The sound was amazing and we used some of those sounds as samples in songs, we recorded bits of the church. We were going around the church with our drumstick hitting things. We went around hitting everything because it sounds so interesting. We had the smallest stuff, no microphones, just singing to the roof. Yeah, it was cool.

How would you describe the approach to your new album, compared to your previous albums?

MATT: Every record since the first one we’ve always started with the bits that didn’t quite make the record just before. When we go back into writing there are normally at least 10 bits and pieces that we’re not finished in time for the record that just been, but this time we started a new and went from absolutely nothing, sort of  a clear out, and came out with brand new things, which was nice. Kind of like we were a new band starting out.

RUSSELL: And then we kept doing it again and again. With every twelve songs, one is good enough to make the record. We have this big list, the church was covered in these big pieces of paper, the list got longer and longer. We have a league table of  the best, most finished songs go at the top and then it goes down to the end where you think what the hell is that…and in the end, the twelve that got to the top, survived. Doesn’t matter who wrote it, it has to be good enough.

How do you decide because obviously you’re going to fight…?

RUSSELL: OH yeah of course we fight. That’s how it’s decided we fight for our idea. No compromises.

EMMA: The best idea wins basically, and then the songs which end up working together the best, setting each other of end up in the final 15/20 I guess. We get rough ideas of connections of songs that work together.

RUSSELL: You get a few opinions of people saying yeah that track is really gonna work. We definitely wanted the songs on the record to be on the record but we had some reassurance that that song is mad, it’s good. When we got to the producer, he triple reassured us, so we knew they were the right ones.

You’ve had a bit of time to catch your breath after so much touring and concentrate on writing and recording, how does it feel now it’s all come together and you’ve got so much ahead of you? Are there any venues on there that you can’t wait to get back to?

RUSSELL: Back to normality, back to playing and being a social bullet. It’s pretty intense us three in a church, in one room focussing on the work and criticizing our work. It’s good to share it, let it be itself. You can’t go back. It won’t be just us having an input, the audience brings something to it.

Does it get to that point where you are being too critical, where you have to let this one be done?

RUSSELL: If it’s recorded you can change it forever. The deadline can’t give you that. But the songs we didn’t record, they will keep evolving. I think having a hundred plates spinning is quite stressful; at least we got some things out of the way. They are strong, it’s just your mind is thinking about it all the time and you start losing sleep.

EMMA: You start obsessing a bit over it.

We’re getting closer to festival season, what are some of your favourite and why?

EMMA: We played Glastonbury the year before last, it was a great experience, we grew up watching some amazing bands play the Pyramid stage and then to play it ourselves was amazing. Some of the smaller ones are really cool, good atmosphere, good crowds.

RUSSELL: You can do a proper show, it’s always quite speedy isn’t festivals. You’re in and out, do the headline slot. It’s a bit of a new thing for us but we have enough songs now so. We used to play two songs, really extended, big jam sessions in the middle. Those days are gone. I think when you play in a brand new country that you’ve never been before is great, we played in Budapest on the last tour for the first time. And you’re hearing your music at volume across a new place is pretty cool. And Southampton common, our hometown, we played that for the first time. Rob da bank’s new festival was pretty cool.

EMMA: Next week is Great Escape… that will be good, that one is always a wild festival.

What do you guys like to do in London?

RUSSELL: It’s always like a home base. We’ve been working down in a studio in Bermondsey. There is a Greg’s with a security guard. Keeping it real. I imagine in five years time it will be full of coffee bars, but we’re just working and went back to some venues. Remembering when we were playing in small bars, it’s nice to drive passed the small place on our way to the big gig. A few are not there anymore, which is a shame.

EMMA: Yeah when some disappear you really notice the struggle, which is sad.