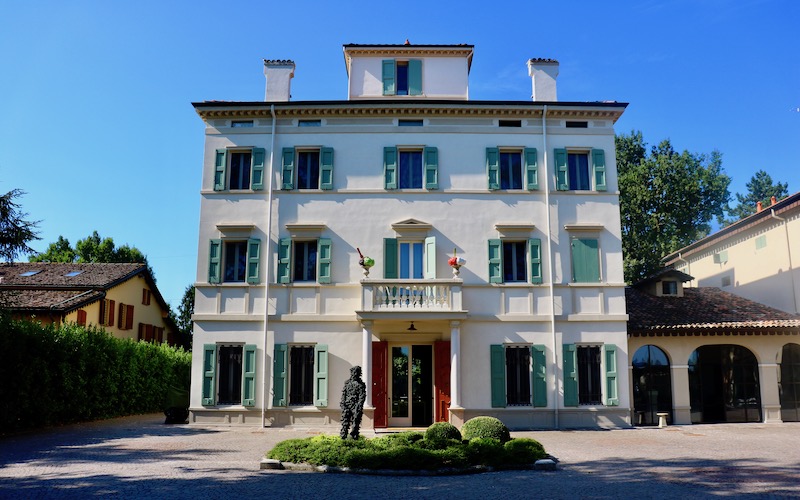 Massimo Bottura almost certainly needs no introduction. If you haven’t already drooled over his Chef’s Table episode you will have heard of his three Michelin-starred restaurant in Modena, Osteria Francescana, which was twice no.1 on the World’s 50 Best list (and was in the top 5 most of the time it wasn’t in the top spot). Of course, worldwide recognition for a tiny restaurant that has just 12 tables usually means one thing: getting a reservation there is nearly impossible. With the opening of Casa Maria Luigia, a new luxury retreat in the countryside outside Modena from Massimo and his wife Lara, there is now a new, and some might say more fun, way to try Massimo’s incredible food.

Having eaten at Osteria Francescana a few years ago, we were desperate to check out Casa Maria Luigia as soon as we could. The hotel opened back in May and we managed to get a reservation for August 3rd, which was the last night before they closed for a two week summer break. The countryside mansion was purchased by Massimo and Lara after it had been derelict for many years – as Lara told us the place had ‘incredible bones’ but needed a lot of work.

The result of their work is pretty spectacular: both bedrooms and public spaces are filled with the pair’s private collection of amazing modern art (Damien Hirst, Tracey Emin, and Ai Weiwei to name a few); books and armchairs are scattered around casually; and there’s a music room filled with Massimo’s collection of jazz records and a serious sound system to play them on. Some original features such as the classically painted ceilings have been restored too, so the whole place has a dreamy mix of historical character and modern flair. It really does feel as if you’ve arrived at a friend’s house.

The relaxed vibe continues in the service. You won’t see armies of buttoned up staff walking around but, trust us, you’ll want for nothing. Feeling peckish? Just head to the kitchen where the fridge is always stocked with goodies. Arriving around lunchtime, we made this one of our first stops, and tucked into ricotta with basil, freshly baked crackers, tomatoes from the vegetable garden, and roasted aubergine. There’s also coffee, water, soft drinks, wine, beers, and bottles of local Lambrusco piled high. Aside from the generosity, the idea that we’re essentially raiding Massimo Bottura’s kitchen is not lost on us.

The grounds too are beautiful; there’s landscaped gardens, an allotment, a boating pond, a tennis court, and a swimming pool, which was built by the previous owner in the 70s and has now been restored. There’s a changing room and another kitchen down here too, so you can help yourself to drinks while you chill by the pool.

Our room was on the first floor and had a little balcony that looked directly out to the pretty tree-lined path that leads up to Casa Maria Luigia. As way of a welcome gift, every guest will find a few chunks of 36 month-aged Parmigiano Reggiano, the prize product of the Emilia Romagna region (which encompasses Modena) – if that’s not a way to win people over we don’t know what is. Our room had an Andy Warhol Marilyn Monroe print on the wall over the big comfy bed, a pair of armchairs, and a fully stocked mini bar and coffee machine, which is all included of course. The bathroom was decked out in sleek black marble, had a separate shower and freestanding roll top bath, two sinks, and Ortigia products from Sicily.

In the evening comes the moment that all the guests in the hotel’s 12 rooms (plus a few last-minute additions from the Osteria Francescana waiting list) have been waiting for: dinner. In a beautiful old carriage house, Massimo has created Francescana at Maria Luigia where a nine-course menu with matching wines is served each night to guests seated on three communal tables. The kitchen pass is at one end where everyone can see the dishes being plated up, and we are even encouraged to get into the kitchen whenever we want, taking pictures and talking with the chefs. Massimo is there himself bounding about the tables, explaining the stories behind the dishes (many of which are personal stories and memories). Compare this to Osteria Francescana, which is much more traditional fine dining, and although the food is similar it’s a totally different experience, much more relaxed and definitely more fun. We’re not saying one is better than the other and if you don’t like communal tables then maybe it’s not for you, but for us it was an incredible experience.

The menu itself is a mixture of new creations, plus some of Massimo’s all time most famous dishes, some of which aren’t even on the menu at Osteria Francescana anymore. The ‘Five Ages of Parmigiano Reggiano’; the Damien Hirst-inspired ‘Beautiful Psychedelic Veal Not Flame Grilled’; and ‘Oops I dropped the Lemon Tart’ all make an appearance. The newer dishes are some of our favourites, particularly the lamb tartare topped with oyster cream and served in an oyster shell, and the ‘pasta and pesto’ which has all the flavours of eating that comforting classic but re-invented (without any pasta!). The kitchen is led by Canadian Jess Rosval who worked at Francescana for six years before moving over to Casa Maria Luigia, and she takes over hosting duties too once Massimo has whizzed back over to Modena to see his other guests.

The next morning, we join the other slightly hungover guests for breakfast in the same carriage house dining room. Everyone is excitedly discussing the highlights from the night before but the breakfast spread is almost as compelling as the night before: gnocchi fritti stuffed with ricotta and mortadella; focaccia freshly baked in the hotel’s wood oven; local sausage topped with zabaglione; and dinky spinach and cheese pies.

We manage to get a few more hours in by the pool before leaving. As we get ready. Jess and the staff are leaving for vacation and we wave them off like old friends. We reluctantly have to leave too, so say our goodbyes to our hosts Massimo and Lara and we’re off again down the driveway between the swaying trees. In case you can’t tell, we absolutely loved Casa Maria Luigia, and if you’ve been trying to go to Osteria Francescana we recommend switching your focus to come here instead – it almost feels like you’ve been invited behind the scenes. Both as a place to stay and a place to eat dinner, it’s an experience you won’t forget.

How to do it

Reservations can be made a few months in advance at casamarialuigia.com Rooms start at €450 a night and the nine-course dinner menu with wines is €450 per person.

Fly from London to Bologna airport and then it’s a quick 25-minute drive to Casa Maria Luigia.

All photos Joel Porter / London on the Inside