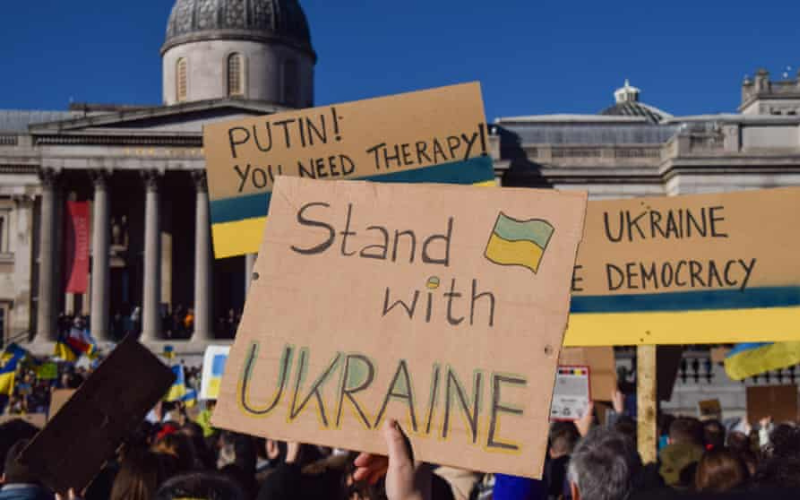 Londoners, if you’re looking to help Ukraine, we’ve rounded up some of the ways you can show your support right here in London. From donating spare items of clothing to getting involved in online supper clubs to donating your pennies and pounds, this is what we can do to #StandWithUkraine…

#CookForUkraine – You can join the #CookForUkraine movement by hosting your own supper club, inviting your friends along and then suggesting a donation to this Just Giving page.

Choose Love Fundraiser – At the beginning of another major refugee crisis, Choose Love is fundraising to provide vital aid and services to those still in and fleeing the country. Donations will go towards emergency medical care, food, shelter, clothes, legal support and mental health support, so if you have anything to spare, here is where you can donate.

Eat the Babushka burger at Haché – London’s burger joint, Haché, has teamed up with Alissa Timoshkina for the the Babushka burger. The 6oz burger topped with topped with spicy coriander pickled carrots, dill, smoked paprika mayo, Alissa’s signature aubergine ‘babushka ganoush’ & crispy carrots will be available at all locations from 19th April – 29th May with £5 from every order being donated directly to UNICEF UK’s Ukraine appeal.

Yurii Kovryzhenko at Mortimer House – The Fitzrovia spot is hosting a spesh fundraising evening on 4th May with chef Yurii Kovryzhenko, who’ll be speaking about Ukrainian food culture alongside Dima Deinega of Dima’s Vodka, followed by a dinner featuring classic Ukrainian dishes like borsch with porcini mushrooms and garlic bread, cabbage rolls stuffed with turkey, buckwheat and raisins and Ukrainian Honey cake. Tickets cost £60 with all proceeds being donated to With Ukraine, a fund set up by the Ukrainian Embassy in London.

Kricket Soho – On 8th May the Soho branch of Kricket, lead by their Ukrainian Chef Dimi Penziev, will be running a special menu featuring Ukrainian garlic bread with wild garlic chilli butter, cabbage rolls with spiced beef & horseradish raita, and honey cake. Dishes will be available for eat-in and takeaway and all proceeds will be donated to Voices of Ukraine, a helping children affected by the war.

Vodka Zelensky – This new vodka, created by Anastasiia Rosinina, who fled Kyiv in March, and Dr. Tobias Reichmuth, is a long-term charity project, with 100% of profits until 2026 going to NGOs and charity projects in Ukraine, with a minimum of £5 per bottle being donated right now.

Varvar Beers at MEATliquor – Euroboozer have rescued beers from Varvar Brew in Kyiv and now you can drink three of the brews at all MEATliquor sites, with 100% of the profits being donated to Drinkers For Ukraine.

MoreYoga – The Dalston MoreYoga Studio is hosting a Late Night Lock In on 13th May, featuring a Bhakti Yoga Flow, a Psychology workshop and Gong Meditation. Tickets cost £25 with 25% of the price going to the Ukraine Appeal through Fierce Calm.

Eat Chicken Kyiv at Drake & Morgan – Drake & Morgan (the restaurant group behind the likes of Devonshire Terrace, The Folly, The Happenstance and The Refinery Bankside) are donating £1 of every Chicken Kyiv dish sold to the British Red Cross who are supporting the work of Ukraine Red Cross. It’s available across their menu at all sites.

Drink at Ognisko Polskie – One of London’s oldest Polish bars, Ognisko Polskie, has created a spesh cocktail named after the Ukrainian President, Volodymyr Zelenskyy. It’s made up of Kavka vodka, blue curaçao, lemon juice, apricot brandy and sugar syrup, and donations from every cocktail will be made to Choose Love’s Ukraine Crisis Fundraiser, helping people displaced by war.