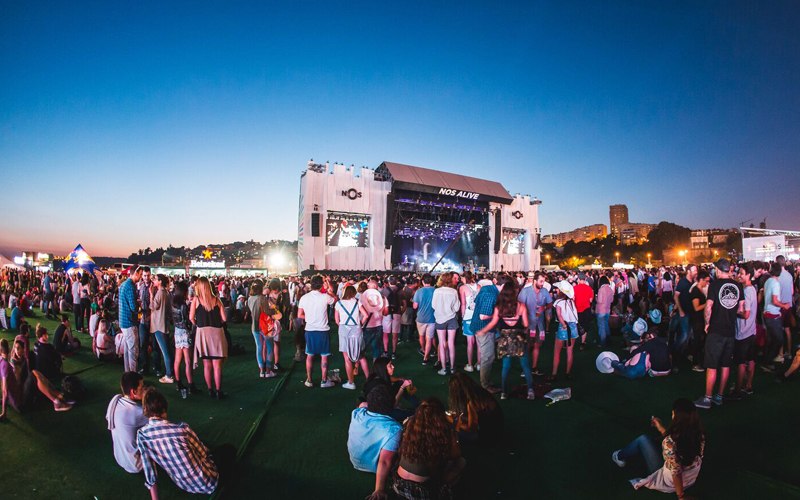 Lisbon is such a beautiful city, fit for exploring food, culture, and architecture, and it’s the base for summer festival NOS Alive. Things start late when the climate is a little different to the UK…that’s called heat…and it gets pretty damn hot over in sunny Portugal, so the action kicks off late afternoon. The three day festival started on Thursday and our first catch of the day was Wolf Alice, who we have to admit came up short. It’s not the songs, their debut album on record is a beaut…it’s their chit-chat and stories between songs. It wasn’t us wincing in the sun, but cringing. Oh dear! Headliners The Chemical Brothers put on an extraordinary show with surreal, otherworldly projections and lights, which was nothing short of mesmerising.

Day two saw us little sun burnt but down the front for Jagwar Ma and Courtney Barnett, both playing on the Heineken Stage to a packed out audience. Father John Misty belted out his rockabilly country twang and was in fact a pretty damn memorable experience. He just looks flipping great doesn’t he? Foals caused chaos on the main stage, and Tame Impala, faultless as ever, released hundreds of bubbles from the stage that floated into the air as the sun went down.

The final day meant we got to watch Grimes for the first time and what a wizard. The show saw Canadian-born Claire Elise Boucher perform her underground experimental music that is just so impressive to experience. How does she do it all, in time, on her own? Band of the day though went to Arcade Fire, whose euphoric, anthemic songs we’ve heard throughout their career, were belted out as loud as possible in giant sing along style…it’s these moments that make NOS Alive special. Three days of music, sun, beer and food and still one day left of the weekend, NOS Alive makes us feel just that.

Here’s our playlist from the best of the festival…