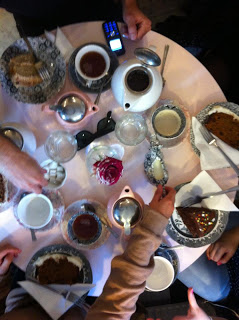 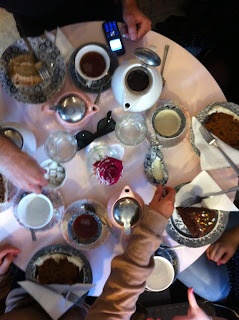 Every now and then we’ll wake up on a Sunday hangover free, and when that does happen we get the hell out of East London and do some exploring. This Sunday we started with a roast in The Stag at Hampstead Heath followed by a brisk walk around the Heath up to Highgate Village where we stumbled upon High Tea of Highgate.

The traditional style tea & cake shop has a wealth of homemade cakes on display – one look at them and we were queuing for a table alongside Victoria Wood and if it’s good enough for her….

Finally seated we scouted out the menu to see what cakes they still had available, they weren’t many but it was late on a Sunday arvo so we’ll let them off.

We tried a selection – the Coffee Cake and Chocolate Butter Cream Cake didn’t disappoint but the Carrot Cake was the clear winner. A huge slab of moist, tasty cake crammed with raisins and served with a thick layer of butter icing on top – as good as it sounds and it looked.

There is a huge selection of teas on offer, we tried the London Afternoon Tea which was a little too mild for our liking, next time we’ll stick to the Breakfast Tea. A great place to take the ‘rents when they visit and not bad value either, clocking in at around £6 for a pot of tea and slice of cake.