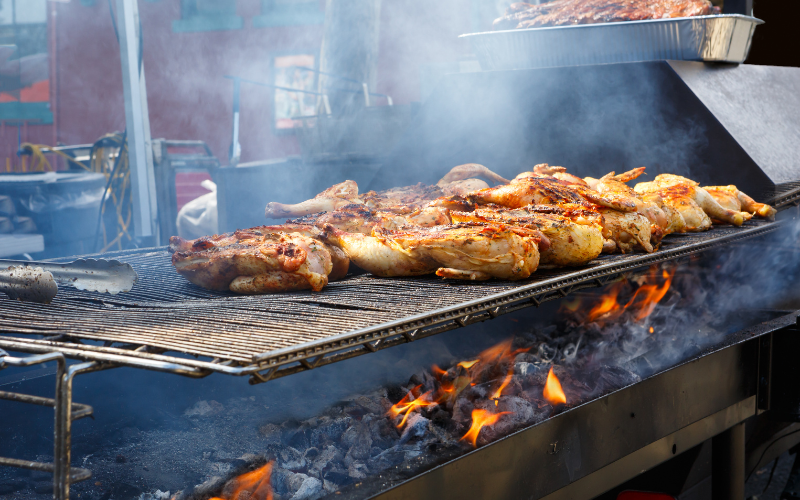 Every now and then, a food trend has London restaurants in a chokehold. In the past, we’ve seen restaurants attentively pickling and fermenting their ingredients, a rash of precisely tweezer-ed arrangements, and chefs traipsing through their nearest field to forage for wild garlic. Throughout the noughties, much of the fine dining lot were gripped by the power of the sous vide, in search of perfect uniformity.

Over the past decade, there’s been one that’s remained a consistent frontrunner: cooking over an open fire. It’s not just for the ultra-rogue few who’ve taken to cooking entirely in the wilderness (see @karadenizli.maceraci and others like him on TikTok), it’s the niche of choice for many of the city’s *hottest* restaurants.

Open-fire cooking in its modern form (sorry, skipping a couple million years here) is usually characterised by the use of spits, grills or pans to char or slow-cook food over active flames. It typically comes hand in hand with open kitchens (whether outside or in) so diners can really get a good look at the spectacle. You could pin its proliferation on Ekstedt, an extremely popular Stockholm restaurant that made its way here, or maybe the woodsmoke-scented spot temper which started off with one site in Soho and is now a hot group throughout the capital.

Whichever way you look at it, open-fire cooking isn’t exactly cutting edge, but that hasn’t stopped it from being the concept behind several of the city’s most influential spots (Brat, Acme Fire Cult and Kiln, to name a few) – as well as a whole new wave of restaurants.

In less than a year, London’s welcomed a swathe of open-fire restaurants, with even more on the horizon. Most recently, In Horto (meaning translated from the Latin for ‘in the garden’) opened at the Southwark Quarter with a focus on rustic, wood-fired cooking. And the wood-fired HUMO launched in Mayfair (headed up by Endo Kazutoshi protégé, Miller Prada), touting a menu of dishes each cooked over a different type of wood depending on the desired flavour. Over in Notting Hill (which is having a revival of its own), ‘listening bar’ Caia serves up food from an open grill, as does the aptly-named Firebird in Soho.

For anyone who wants to get up close and personal with the flames, you’ve got The Counter which opened on Golborne Road back in the summer. The contemporary ocakbasi (which translates to ‘fireside or stand by the grill’) restaurant centres around the counter from which diners can watch all the open-fire-charcoal-grill action. And, while this may not strictly classify as ‘open fire’, there are quite a few yakiniku (Japanese grilled meat) restaurants coming soon, one of which (Yakininku Like) specialises in solo-grilling.

Can we expect to see more open up? That’s up to the restaurant gods, but with a new restaurant from fire-loving Tomos Parry slated to be on the way to Soho and live-fire Lumette soon to open, it seems that they’re feeling (surprisingly) benevolent. But we’ll leave you with this free tip for any current or prospective wood-fired restaurant: bring back matchbooks. Matchbooks are newly hot again too – it just makes sense.