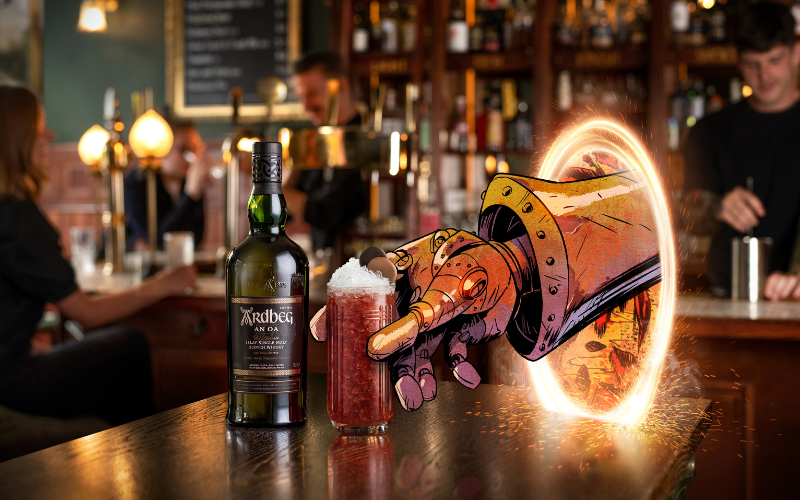 Fancy getting a masterclass in comic illustration from experts in the field? Or what about catching an exclusive screening of a timeless Sci-Fi classic?  Well here’s your chance. Assemble your comic book-loving, Sci-Fi fanatic and cocktail enthusiast friends and head down to Ardbeg’s pop-up to get involved in some one-of-a-kind experiences spearheaded by big names.

For just three days this month, The Islay malt whisky makers are bringing a series of weird and wonderful comic-themed events to town, taking over White Rabbit Studios in Shoreditch and filling the space with pop art, arcade games and posters. The pop-up is coming as a celebration of the launch of Planet Ardbeg, a 40-page Sci-Fi anthology that the brand has created in collaboration with three artists.

The limited-edition comic book tells the ‘origin stories’ of three Ardbeg expressions: Ardbeg Ten Years Old, Ardbeg An Oa and Ardbeg Wee Beastie. Guardians of Oa by Sanford Greene sees a copper city come under attack by a monstrous creature; The Best Laid Schemes by Ronald Wimberly is a neo-western featuring giant botanicals and big beasts; and Take it with a Grain of Sand by Emma Ríos follows a journey through a land lost in time. The book will be available to buy at the Ardbeg x Comic Crush store for £8.

Entry to the pop-up will be free and you’ll get to browse the comics at the store, create your own Planet Ardbeg-themed t-shirt at the printing station, grab a smoky Ardbeg cocktail for £9 at the bar and test your skills out on the retro arcade machines all day. On the Friday, there’ll be a free art drawing demonstration by Jake Detonator (from 5.30pm) and on Saturday you can catch free screenings of Sci-Fi classics 2001: A Space Odyssey (at 5.30pm) and Alien (at 8pm). Alongside the free programme, there’ll also be some paid events including a graphic novel drawing class led by Regular Show and Beano illustrator Laura Howell and various Ardbeg cocktail masterclasses. Paid events are priced at £15 and they’ll throw in a free Ardbeg cocktail and copy of Planet Ardbeg too. Looking for a nice slice of Sci-Fi escapism on a rainy London day? You’ve just found it.

Get tickets for the one-of-a-kind masterclasses here