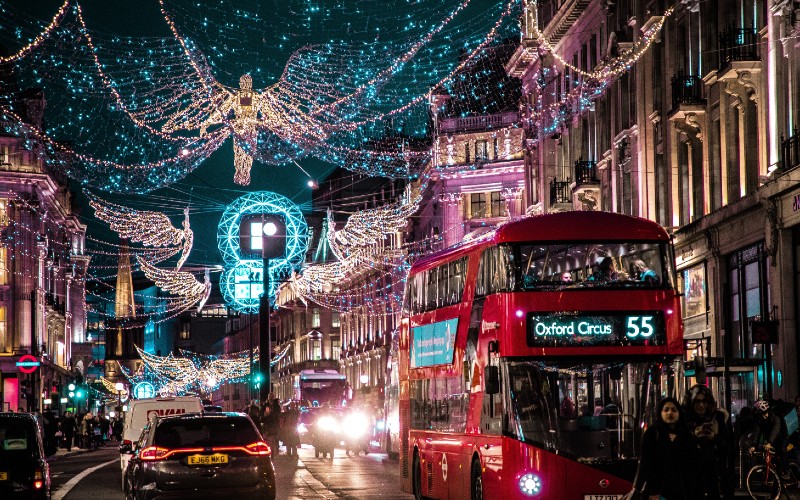 2020 has been a strange year (and that’s putting it mildly) and as much as we’re all hoping for things to return to normal, there’s no telling when that will be, and even if there is a normal to go back to. That means Christmas will be different and significantly scaled down for this year but it’s definitely not cancelled! We’ve got a running list of all the festive fun that is still happening in London to help get you all in the spirit.

The Churchill Arms Lights – the Kensington pub is known for its OTT Christmas display and though they’re having less trees in 2020 it’s still going to be LIT. You can watch the switch-on live on 2nd December at 5pm on Facebook.

Oxford Street Lights – there won’t be a big switch-on event but Oxford Street is still getting lit this Christmas. This year the lights have been created in partnership with Selfridges and will showcase a poem dedicated to the heroes of 2020.

Fenwick’s Christmas Concierge – the Bond Street store is temporarily closed so Fenwick’s is bringing Christmas to you with their remote concierge service. You can get your pressies picked up, wrapped and delivered; havea virtual personal shopping sesh; get a full package of decs and tree delivered; and even have them take care of all final touches like lights, candles and crackers. Book an appointment here.

Carnaby Christmas Lights – this year Carnaby has teamed up with Choose Love for its Christmas lights. The pink neon lightboxes running down the length of the street each contain positive words in an effort to spread the joy. And if you can’t get down to Carnaby to see the lights in person, you can take a 360° online tour, either on street level or 10ft above the installation, from the comfort of your sofa.

Harvey Nichols Windows – Harvey Nicks has unveiled its Christmas window display and it’s a big 2020 mood. The words ‘Bah Humbug’ have been lit up in neon against a shimmering backdrop with ‘Bring On 2021’ beaming out from another window.

Once Upon a Christmas at Selfridges – Christmas has come to Selfridges as the department store has unveiled its windows and launched its festive campaign, including Elfridges (see what they did there?) virtual shopping appointments, a bespoke hamper service and 121 ‘Dial-a-Santa’ video appointments so you can get some time in with the big man.

Marylebone Christmas Lights – any extra cheer is very welcome this year and Marylebone Village has played its part by turning on its Christmas lights early.

Regent Street & St James’s Lights – the Spirit of Christmas lights, the largest lights installation in the country, are getting switched on in Central London on 14th November.

Liberty Christmas Shop – Liberty has opened up their Christmas Shop and decked it out in standard OTT style, with 1000 different bauble designs on sale. From the traditional red, green and gold to wackier ornaments like Big Ben, soy sauce bottles and beetles, not mention whale-printed crackers and brussel sprout wrapping paper, this is the place to come for your festive decs.

Chelsea Christmas Lights – the West London neighbourhood has been lit up with displays across Sloane Square, Duke of York Square, Pavilion Road and new crown installations on King’s Road.

Covent Garden Lights – the piazza is will be getting all lit up this year and as well as the 115,000 lights, the whopping Christmas tree will be back, and we’re hoping the giant mistletoe chandeliers will be too.

King’s Cross Christmas Trees – not one, not two but THREE Christmas trees are being put up in King’s Cross this year on 23rd November; the fariytale forest-inspired Electric Nemeton Tree in Granary Square, the Terrarium Tree from the Botanical Boys in Coal Drops Yard, and the  interactive multi-coloured People’s Tree in Battle Bridge Place.

The Nutcracker at the Royal Albert Hall – there’s a Christmas season of concerts and carols running at the Royal Albert Hall this year as well as performances of The Nutcracker by the Birmingham Royal Ballet from ​28th December to 10th January. All shows will be fully socially distanced and safe with less than a third of the usual amount of tickets available – that means the Hall is operating at a loss to help keep staff and musicians from being laid off, which is very much in the Christmas spirit.

Christmas at Kew – the winter light trail is back at Kew for another year with a tunnel of light, illuminations in the Rose Garden, laser projections on Temperate House and a light show at Palm House Pond.

Shelter Carol Concert – Shelter is hosting the UK’s biggest virtual carol concert on 3rd December, streaming live from St Martin-in-the-Fields, so sign up for free and join in the singalong.

Miracle at Henrietta – the US’s renowned Miracle bar is coming back to London just in time for Christmas. Popping up on the Henrietta Hotel’s mezzanine, the Christmas themed pop-up will be serving up their famous festive cocktails with a side of kitsch. You can also enjoy a selection of snacks like farinata & parmesan, gnocco fritto and sardine & lemon skewers whilst taking in the extravagant retro Christmas decorations.

Backyard Cinema – the Snow Kingdom is back at Backyard Cinema’s Wandsworth home this year, with immersive screenings of holiday classics like The Holiday, Home Alone, Elf and The Muppets Christmas Carol.