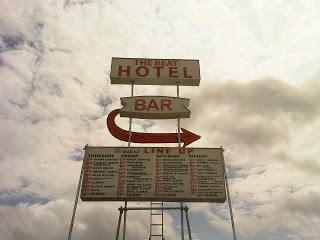 Possibly the one we’re most excited about is the Beat Hotel which is new for 2011. Located between the Pyramid and John Peel stage the Beat Hotel will be serving up cocktails and a smoked BBQ by the infamous Meateasy. So if you fancy filling your face with a big, juicy burger then you know where it’s at!

For posh nosh head to the Deluxe Diner in Shangri La where Michelin starred chef Chris Gillard serves up gourmet treats such as Cornish Octopus braised with Fino Sherry, Red Onion & Chickpeas; Griddled Ox Heart, Chard & Anchovy; Chocolate & Armagnac Terrine and Fresh Cherries. But make sure you get your reservation in early as last year it was fully booked.

For French fare head to La Grande Bouffe and try their top-selling dish “La Tartiflette Originale”. You can find them in the Jazz field – just look for the stall with the biggest queue.

Cheap eats can be found at the Hare Krishna tent. They dish out veggie food for free, all it takes is a bit of singing and the food appears as if by magic. Beware though the singing can get slightly annoying….Hare, Hare, Krishna, Krishna over and over and over.

Apparently the Buddha tent do the same only you don’t have to sing you just have to donate whatever you can afford. Both of which are a good choice on a Sunday arvo when you’ve blown your load on drink and……

And if all else fails and you find yourself lost at 3am in need of a kebab just head to the nearest food van – you can hardly go wrong with chips!