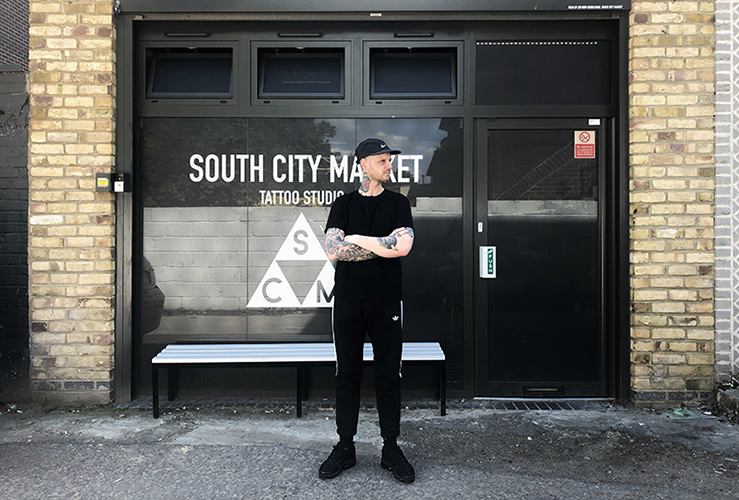 The art of tattooing goes back to the dawn of man. It is an art form that spans many cultures and can say so much about a person, giving an insight to their identity, religion, loves, losses and even their appreciation for cartoon-style bulldogs. Whatever design you go for, it’s important that your ink is a strong choice for it is present upon your skin until you turn to dust.

South City Market is a tattoo studio in New Cross which is “unlike any other tattoo studio” says founder Ricky Williams. The idea being that they can “beat the preconception that people have of tattoo studios where people feel worried, judged or worse” continues Ricky who has worked at Parliament studio in Finsbury Park.

Having been down there to check out the space, which is super laidback and welcoming, we got to see Ricky at work. His expertise is in black and grey work and he’s inked a host of celebs. Ricky’s iPad is his best friend and the process of pulling together a unique drawing based on an idea takes shape before our eyes. Ricky pulls together images on Pinterest and splices things together in an immersive lesson in design.

“I personally love Pinterest although a lot of tattooers out there hate it, I definitely find some really amazing stuff whilst looking for something completely different that I often save for later. We have all been down that Pinterest rabbit hole at some point. Drawing on my iPad has changed my life in so many ways, it’s way better than carrying around a backpack full of tracing paper, pencil cases filled with blunt pencils and no sharpeners. I can easily pull my iPad out find some reference in an instant and draw up a tattoo on the spot, hassle-free.” Ricky tells us.

Not only does this save time, but the client also gets to influence the artwork in real-time and become part of the process. With an ever-growing family of resident tattoo artists at South City Market, there isn’t a style they can’t create. They also have big plans for the future…

“We really want to help change things in the tattoo industry, especially in the UK. The UK is still so far behind compared to other countries. We have started working with a lot of charities, tattooing pre-drawn designs with all profits going to them. Also, we do a lot to try and help young creative people, giving them the opportunity to pursue their dreams of becoming a tattoo artist.” explains Ricky.

It’s safe to say that South City Market is a fun place to hang out and see some pretty incredible work.