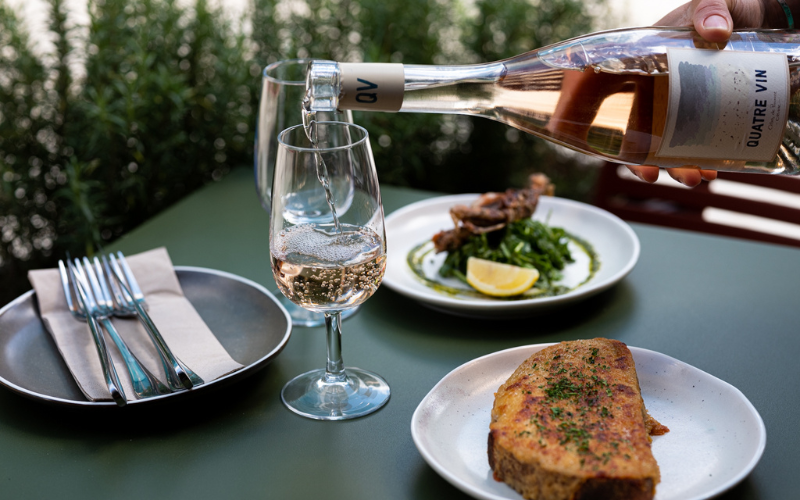 RAREBIT is a relatively new addition to the Elephant Park area, having just opened this summer, but it’s quickly become a fave in the neighbourhood. A restaurant, bar and grocery store all wrapped into one, RAREBIT celebrates modern British food, stocking and serving produce from some of the best in the local game. Meaning you can stop by in the morning for some Climpson & Sons coffee or bread and pastries from Flor. Then, later on, you can grab some cheeses from Neal’s Yard Dairy and for dinner have a taste of their kitchen menu, prepared using rare breed meats from O’ Shea’s Butchers and fresh produce from Natoora.

Overseeing the kitchen is head chef Liv Lionel, who’s crafted the RAREBIT menu as an exploration of what modern British cuisine means to her as a young British Caribbean woman. Since it’s an all-day affair, the menu shifts slightly depending on the time of day, but expect dishes such as:

As for drinks, you can choose from a range of craft beers, classic cocktails (including their signature Welsh Negroni) and wines (all of which are also available to buy and take away from the shop).

If you already like the sound of all that, have we got a deal for you. As one of our INSIDERS, you can get 30% off food at RAREBIT from Monday-Saturday for the whole of October.

Terms & Conditions
This offer is valid Mon – Sat, until Mon 31st October 2022.
30% offer only valid for food, excludes drinks, service and any other offers.
Offer only valid on sit-down dining and cannot be redeemed in the shop.