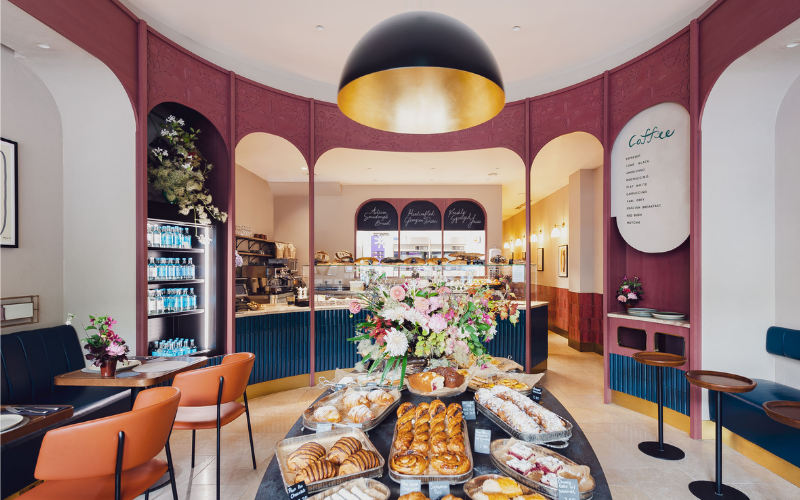 A slice of Tiblisi has come to London with the arrival of artisan Georgian bakery Entrée in Notting Hill. Designed by duo Holloway Li ad inspired by a Georgian ‘supra’ or feast, it’s a dream for all Wes Anderson fans out there as it takes cues from his distinctive cinematic style, particularly the chocolate making scene at Mendl’s Sweet Shop in the Grand Budapest Hotel. The layout of the space, decked out in shades of teal and plum, also mirrors that of a theatre – the shopfront window is the apron, the cafe is the stage, the serving area is the proscenium arch and the window behind the counter offers a view into the backstage area.

Traditional Georgian breads and pies and French pastries and cakes are displayed on the large oval table in the cafe, drawing on the Georgian custom of the ‘supra’, a feast centred around a large gathering table. There are also salads and sandwiches at the counter, and soups, stews and Georgian dishes coming from the kitchen too. This London bakery is the first Entrée outside of Tibilisi and Baku, and with the group pushing for international openings, there could well be more on the way.