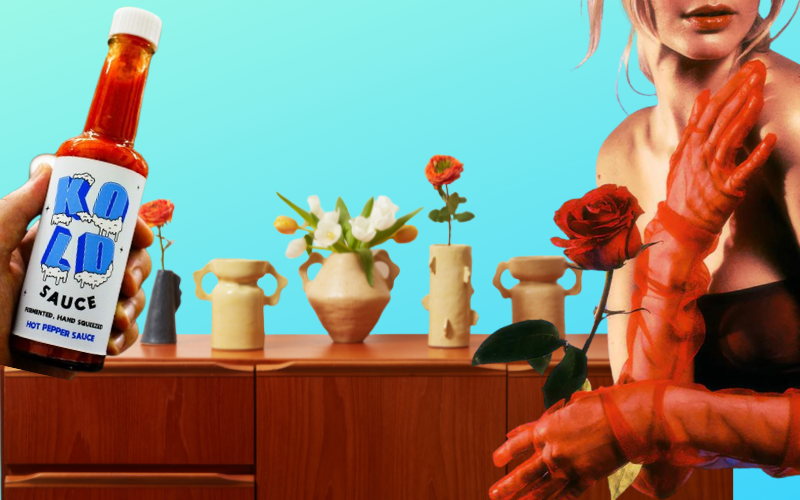 Lockdown, let us take you back there. For many, it was a time of baking banana bread, living in joggers, and coming up with ever-more-fanciful reasons to justify opening a bottle of wine. For others, it was the perfect time to pivot (yeah we said it) and take their careers in a whole new direction, starting up new brands and businesses from scratch – furloughed chefs launching their own food concepts, designers making their own clothes, and pals diving head-first into completely different ventures. We’re checking in on some of our fave businesses that launched in lockdown to see how they’ve grown and what they’ve got planned for us next.

Hot 4 U has to be one of the biggest lockdown success stories in London. What started as a delivery service run by Matthew Scott and Eddy Tejada (who’s since left the biz), turning out some seriously inventive finish-at-home dishes, led to pop-ups at the likes of Top Cuvée, Cave Cuvée, Swift and Half Cut Market, and long-term residences at East London pubs The Plough, The Prince Arthur and The Haggerston, bringing garum pom bears and whisky bone marrow luges to the masses. Now Matthew is taking it permanent (with a little help from Wingnut Wines) by opening a new spot, Papi. Launching early next year in London Fields, Papi will feature a 28-cover dining room with an open kitchen on the ground floor and an intimate cocktail bar the next floor down, with Matthew showcasing his signature mix of sustainable, zero-waste and fun cookery in a slightly more refined and elegant way.

Ain’t nothing like a hearty pie and Will Lewis certainly knows his way round one of those. After being furloughed in the first lockdown, the former St John and Brat chef started knocking out cook-at-home pies and delivering around East London by bike from his base in Leyton. He soon went citywide and even became the official pie supplier to Watford FC. The pie demand has been so great that he’s now got himself a unit in the railway arches by London Fields, where you can buy ones like steak & ale, roast squash & chickpea and curried chicken & coconut to cook at home, and if you want something to eat then and there, he’s got a kiosk just next door in Netil Market, slinging hot pies, mash and gravy.

The bottle may say Kold but this sauce is HAWT. Inspired by the classic American hot pepper sauce he grew up with and after a couple of YouTube episodes on the subject, Drew Wolf started fermenting chillies in his kitchen and Kold Sauce was born. Naturally fermented, raw and cold pressed, Kold Sauce has won a legion of fans – the OG one has even picked up a Great Taste Award – and as well as a Green and an extra hot Gold, Drew has since created Kold Smoke, cold-smoked over whisky cask oak sawdust, and he’s also turning out some of the iciest merch in the game.

After realising that she could never find the time to visit any of the zero-waste shops in her area, Ella Shone decided it made more sense to bring the shop to the people, rather than the other way around, and after being furloughed in lockdown, she founded TOPUP TRUCK. The zero-waste delivery service runs from an old milk float and is stocked with over 180 products including tea, coffee, pulses, toiletries, household goods, oils, spices, and more, all free of packaging, so you just fill up whatever containers you like with your goods and pay for them. She recently introduced a returnable containers system for the truck, which you pay a deposit for and then get the money back on their return. This enables you to get your goods without waiting in line when the truck pulls up, in fact, you don’t even have to be there at all as the team can leave your bits in a safe place for you.

With lockdown giving her the time and space to take stock of what she wanted to do, Esme Shayler-Webb founded Great Objects, an online shop that showcases champions creativity, showcases indie and ethical, and offers a unique curation of home and lifestyle stock that she thought was lacking from the space. Esme takes great care when it comes to sourcing the brands she features – her selection includes Chorus, Roen, Lalo, ABS Objects, Maren + Wild and Kinshipped – and she also works with brands on collabs and exclusives for Great Objects. She opened her first IRL pop-up shop in Netil Market this autumn and there are more pop-ups on the horizon, and she’s also developing her own line of Great Objects products so expect a whole lot more homeware in the future.

After time spent working in a deli and running sandwich pop-ups in New York, working in kitchens in London (like Bodega Rita’s) and private cheffing, Spasia Dinkovski started up Mystic Börek in lockdown. Inspired by her Macedonian roots, Mystic Börek does whole filo pies – seriously, they’re enormous – filled with things like feta, roast cauliflower & pickled cucumber and potato, parmesan & creamed spinach. She started out taking DM orders and dropping them at collection points around London and she’s now graduated to a proper online shop and her own kitchen space. Spasia has also done various collabs with the likes of Supa Ya Ramen and The Plimsoll, where she recently celebrated Mystic Börek’s second birthday – here’s to many more.

Designer and embroiderer Sophie Tresadern became more conscious of her own fashion habits during lockdown and started upcycling clothes she wasn’t wearing anymore into new pieces. Before long, her friends and family were donating their unwanted wardrobe items and then her label KIPPA TRES was born. The label is about as circular as fashion gets as Sophie seeks out sustainable fabrics and unwanted clothes destined for landfill, turning them into completely new and unique garms, like patchworking Calvin Klein and Levi’s jeans and reworking Champion sportswear into maxi-style skirts. Sophie has already done pop-ups with Urban Outfitters and worked with Depop and Adidas on an upcycled collection, and as well as continuing with her own drops, she’s recently launched a new website and has more pop-ups and markets in the works. Long live slow fashion.

After baking bread from her kitchen and delivering it to friends and neighbours during lockdown, Sophia and her husband Jesse moved out of the house and into a proper pastel pink-fronted bakery in Crouch End, with long queues snaking out the door when they first opened. Sourdough Sophia specialises in sourdough breads (duh!) made using organic locally grown milled grains and fermented for 24 hours, as well as other treats like croissants, cruffins, brownies, danishes and cheesecakes. And if you want to have a go at baking yourself, Sophia runs a range of courses both online and in-person, so you’ll be laminating dough in no time.

In a world full of hyped products, Dr. Sting’s is the real deal. Founded by chef Ben Lippett and designer Jamie Kaye, this is proper small batch hot honey, made by hand in South East London using only 100% blossom honey, organic chillies and quality apple cider vinegar. After selling out their first batches in double quick time, the pair have since done hot honey collabs with the likes of Eggbreak, MOTH Drinks, Coqfighter, Allpress, Ruben’s Reubens and Tandoor Chop House, and with a new production set-up, they’ve been able to release bigger bottles and grow their stockists to include DELLI, Mare Street Market, Superette, Kitchen Provisions, and Trude’s. The batches keep getting bigger so there’ll be a whole lot more hot honey coming your way in 2023 and beyond.

London brand Barbara Bianco, created by Liv and Mollie during lockdown, is all about slow fashion and making clothes that you’ll want to keep forever. Barbara Bianco embodies the duo’s sense of style with a little bit of sass and sophistication thrown in and is a way for the pair to celebrate women’s bodies. The collection has a strong 90s and 00s aesthetic, with the Barbs corsets (spotted on the likes of Maya Jama and Becky Hill) being staples, and everything is handmade to order to reduce waste. The ladies have plans for a menswear capsule collection and are working on Barbara nights too, so expect to see a whole lot more BB.

ONE Essentials was founded by long-time fashion designer Carrie Davies who had fallen out of love with the industry and was looking for a way to make a change. She wanted to start up a basics brand that could address the reckless and completely unsustainable amount of textile waste produced every year. So, she built ONE Essentials with circularity at its centre. Each piece in the range of underwear, sweatshirts and t-shirts is made out of both recycled materials and organic cotton and their takeback scheme (where you can send your old and no longer functional ONE Essentials garments back – and for an added 10% off your next order) ensures they’re diverting waste from the landfill. But it was certainly a complicated time to embark on a new business. In the months leading up to the launch, pre-Christmas lockdowns were throwing spanners in pop-up plans, Brexit was causing its own slew of issues and signs of the oncoming cost of living crisis were limiting consumer spending. But, despite difficulties, ONE Essentials was able to launch in September of last year, has been supported by the Small But Perfect programme for circular start-ups and is planning expansions this year. Seems like there are some good things on the horizon.

We all love ceramics, right? Whether functional or purely decorative, there’s nothing like a handmade, hand-painted vase to cheer up your shelves – and Vaisselle’s are particularly stunning. Designed by Léa Zana, Vaisselle’s range of vases, jugs, tableware and glassware is vibrant and eclectic, with pieces that both incorporate modern motifs and more old-school designs inspired by her childhood in rural France. She founded the brand in lockdown and in a somewhat unlikely change of direction. Previously, Léa had worked as a footwear designer, but when she was made redundant at the start of the pandemic, she decided to turn a longtime love of ceramics into a business. Two years on, the operation remains as compact as it has always been, but it’s working very well. Vaisselle is run entirely by Léa – from her phone – while the pieces are produced by two makers (a husband and wife duo with 70 years of experience between them) in Spain, and as a trio, they’ve amassed a loyal following online and their work is now stocked by the likes of Harrods and Liberty.

Dreamt up in the first lockdown, amie wine quickly started appearing on our Insta feeds when it launched in the summer of 2020. The idea came to co-founders Will Sandbach and Abbie Roden, when, in those strange early days of the pandemic, they saw an opportunity to tap into the rose market and, more specifically, the direct-to-consumer wine market. Not only that, but they were craving nothing more than to see friends, so they recruited pals Hermione Underwood (a PR expert) and Jessica Yolanda Kaye (an acclaimed artist) to bring the brand together. Choosing the name ‘amie’ to pay homage to the brand’s ethos as being created for friends by friends, the business was born and the fresh and vibrant rosé seemed to be a fast success. Since then, they’ve expanded their range beyond the OG rosé and they now make a red (Carignan), a white (Sauvignon Blanc and Gros Manseng) and an organic rosé (Grenache and Cinsault). They’ve also opened an in-person outpost – the amie wine studio in Eccleston Yards- where guests can enjoy workshops or host their own events while sipping on the signature wines.