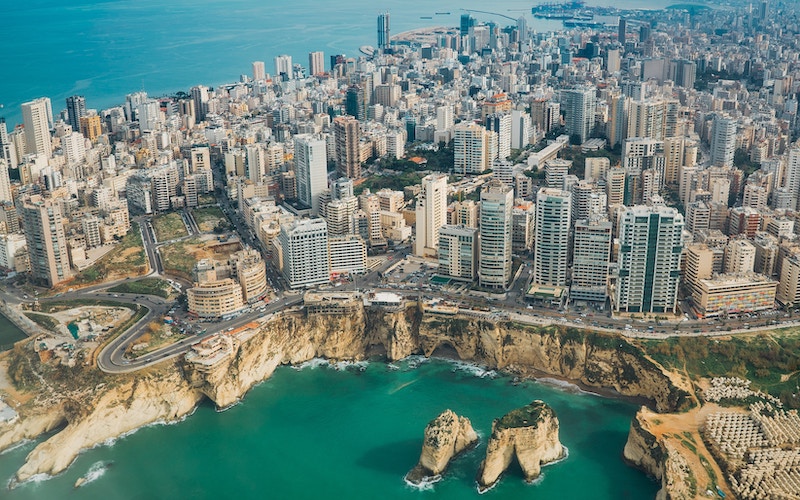 We’re seasoned travellers, having been everywhere from Israel and Jordan to Colombia and India over the years. But there’s one place that’s been on our wish list for years that we only just made it to – Beirut. And, having spent four nights there recently it’s already one of our favourite cities, with incredible food, beautiful architecture, beaches, bars and a fun, friendly atmosphere.

We arrived straight from eight nights in Jordan and weren’t sure what to expect but as we rolled up to the Phoenicia Hotel wedged between a swish new build apartment block, six lane motorway and derelict bombed-out hotel that gave us a pretty good idea. Beirut is a city of juxtapositions, where old combines with new, mosques neighbour the churches, and there’s great wealth but also great poverty.

Lebanon has been through very tough times and as recently as 2006 there was an outbreak of war which followed the 15 year civil war from 1975 to 1990. Having survived these wars, the people understand what it’s like to live day by day and they have a real lust for life. They want to have a good time and that means eating, drinking, shopping, sightseeing all day, every day. So as a tourist you’re gonna wanna do what the locals do…

The shawarma is the ultimate street food snack and can be eaten at all times of day – there’s plenty of places open 24 hours. Our favourite spots were Makhlouf and Jabbour which happen to be side by side. At both spots you’ll find incredible chicken or lamb shawarmas, stuffed with meat, salad, garlic mayo and chips soaked in meat fat. Just look for the queue of locals. If you’re on the Gemayze strip and you need something to soak up the booze El Kbeer is fairly decent too.

Tawlet was the restaurant most recommended to us. It’s a lunch only spot that serves food from a different region everyday cooked by a visitor from the region. There’s two options; the buffet which includes a soft drink and desserts of the plate of the day. It’s a great place to try some of the local delicacies and they also sell products from farmers to take away.

Beirut has a large Armenian community located in Bourj Hammoud but their food influence has spread throughout the city. Mayrig, located in Gemmayze was our pick of the bunch, with a huge leafy courtyard it’s a great place to enjoy the Armenian salads, kebabs covered in yoghurt and pans of manti dumplings covered in a tomato sauce.

For something with an international spin Baron is a hipster hotspot – make sure you book ahead. It’s a small plate sharing menu with a focus on quality ingredients – meat is imported from small farms in the UK(!) Don’t miss the potato nuggets with crumbled local sausage soujak and Brussels sprouts if they are on the menu. YUM. Skip the Lebanese wines though. We weren’t fans of the six we tried and in fact we only found one we liked during the whole trip which turned out to be the only natural wine in Lebanon – drink it at Vertical 33 wine bar, a cute spot serving only their own label wines and charcuterie plates.

Liza is another much lauded restaurant, a place for foodies and fashionistas located in a beautiful old house with incredible design features. Food is a twist on traditional Lebanese but done well: a bowl of pita chips coated in sumac; lamb meatballs in a rich, sticky pomegranate sauce on a bed of bulgar; and all the usual mezze suspects.

The best of the rest includes falafel at Falafel Sahyoun and his brother’s next door. Apparently the game is you eat one of each then choose you’re favourite. Luckily we ate at Original Shop No 1 first before we saw the sign in his brother’s window stating it had been shut down by the health department – clearly no love lost here!

Knafeh is the ultimate breakfast dish but we’d recommend eating it whenever you get your hands on it – Sea Sweet is one of the best spots. And then there’s the lamuchan and manzaneer breads: The Lebanese Bakery brings the hipster vibes but old school Ichkhanian Bakery has been going since 1946 and is one of the best value.

If you’re in Beirut on Saturday be sure to check out the farmers market, Souk el Tayeb (run by the same people behind Tawlet) both for goodies to bring home and treats to eat then and there.

Beirut is a real party town and there’s an epic selection of bars throughout the city, although the highest concentration lies in Mar Mikhael and Gemmayze. Our favourites were the new Electric Bing Sutt which is run by bar tender Jad Ballout previously of Grande Central. It has an Asian spin and he creates all his own infusions, served alongside Asian dishes.

DragonFly is another cute spot which has been around a long time, Anise serves up killer negronis mixed by a team of dapper gents and Chaplin next door is a little bit more raucous. Do as the locals do and hit the streets for a spontaneous bar crawl….

There’s museums, art galleries, a next level coffee scene and lots of shops but we were happy just pottering around, take it all in and filling our camera roll. From a walk along the corniche watching kids jump from the rocks into the emerald sea to exploring the colourful neighbourhoods of Achrafieh and Hamra whilst making sure we didn’t get mowed down or end up on the wrong side of the motorway with no crossing (a story for another day!).

Lebanon isn’t a huge country so if you have time it’s worth exploring too. We only made it to Byblos, a small seaside town which also happens to be one of the oldest inhabited cities and is only 45 minutes away. In hindsight we’d skip that and go a little further to Tyre, a place recommended to us many times. Unfortunately we didn’t make it but it’s yet another reason for us to go back….

The Phoenicia Hotel is one of the city’s most legendary hotels with a very old school glamorous feel that makes you understand why Beirut was once known as ‘the Paris of the Middle East. It’s got a great location, an indoor and outdoor pool, a gym, and one of the most epic breakfast buffets we’ve seen, and we’ve seen a few. Read our full review here. Rooms from £205 a night.

All photos except main image by Jules Pearson